Posted by Jamie Kerslake-Weber on 30th May, 2018 in Holidays, News, Travel Inspiration

In May 2018, I travelled to Georgia on a small group tour to explore everything Georgia has to offer. Georgia is home to Caucasus Mountain villages and Black Sea beaches. It’s famous for Vardzia, a sprawling cave Monastery dating back to the 12th century, and the ancient wine-growing region Kakheti.  Being located at the crossroads of Eastern Europe and Western Asia, Georgia is a country that was part of the former USSR and after the dissolution of the Soviet Union in 1991 regained its independence.

The tour was a combination of sightseeing of cultural towns and cities, walks in stunning picturesque countryside along with exploration of historical sites. We experienced Georgian hospitality eating delicious traditional home-cooked food with local families washed down with plenty of fantastic Georgian wine.

I was pleasantly surprised how clean the towns and cities were with barely no sight of rubbish/pollution. It was a joy to see the local people sweeping the streets and paths in front of their houses and businesses and nearly no existence of any famous food chains or branded outlet stores. It really was quite refreshing knowing that there is still some untouched countries that are just doing it their own way.

On Arrival in Tbilisi, Georgia’s Capital City it quickly became obvious how naïve I was to think that there would still be some signs of the Soviet Union rule in any way shape or form. Besides visits to various museums throughout my trip I honestly saw no evidence of any Soviet influence.  Tbilisi is a city like no other I have visited with its diverse architecture mixing both old and new and making it all strangely fit perfectly together without seeming out of place – like it was always meant to be! 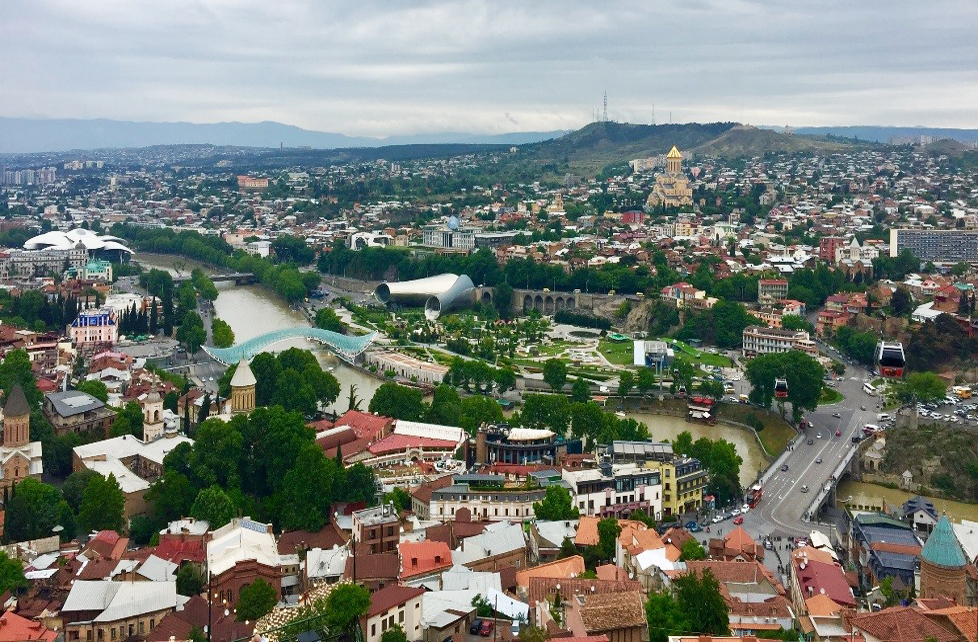 We stayed in the Old Town of Tbilisi which is filled with quaint mazelike cobblestoned streets, local shops, restaurants, bars and welcoming locals. The Old Towns is perfectly located for tourists with nearly all of the main attractions being within walking distance. The perfect example of this is the full day city tour we did – all done by foot visiting both the New and Old Town. 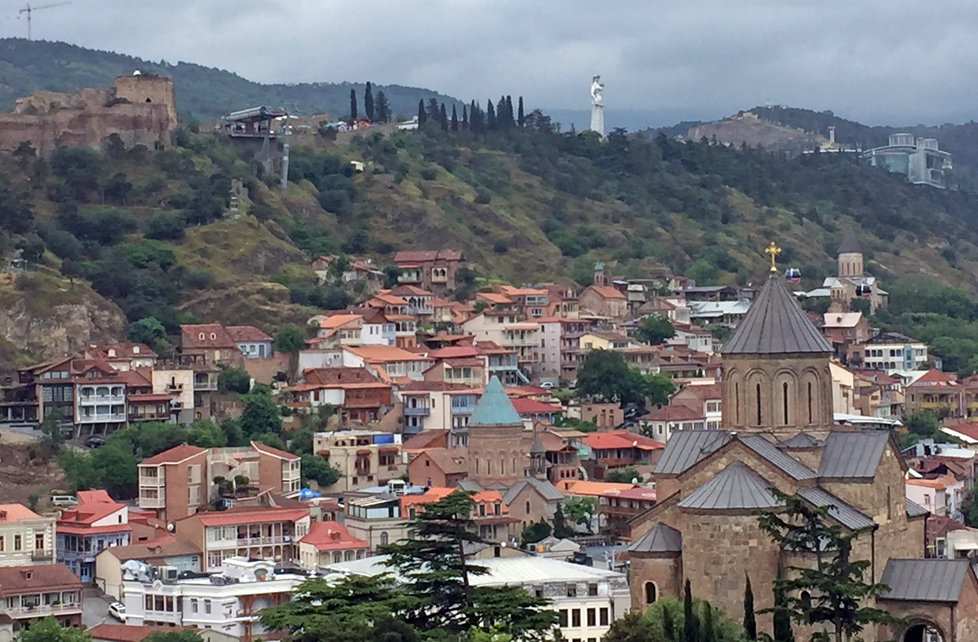 After Tbilisi we headed east to Kakheti, Georgia’s wine region. We drove through the stunning countryside, shadowed by mountain views and stopped along the way at the tiny fortified hilltop town of Sighnaghi, known locally as the “Paris of Georgia”. 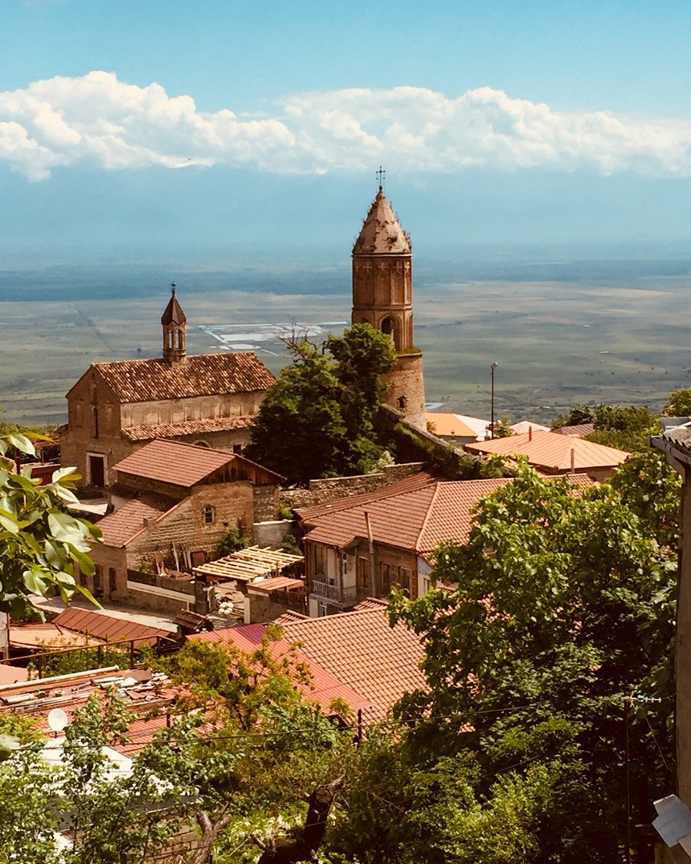 We visited a few iconic wineries along our scenic drive, learning how the traditional Georgian Wine is made and stopping to enjoy lunch with a local family before proceeding to Telavi, a small city in the foothills of the Tsiv-Gombori mountain range.  Along the way we passed by Gremi, where the majestic fortress stands. This small castle is perched on a hill with amazing views of the wine region.

A highlight of this region was a visit to Alaverdi Cathedral, the 11th century Georgian Orthodox Monastery – once Georgia’s highest at around 50m, it dominates the surrounding countryside. 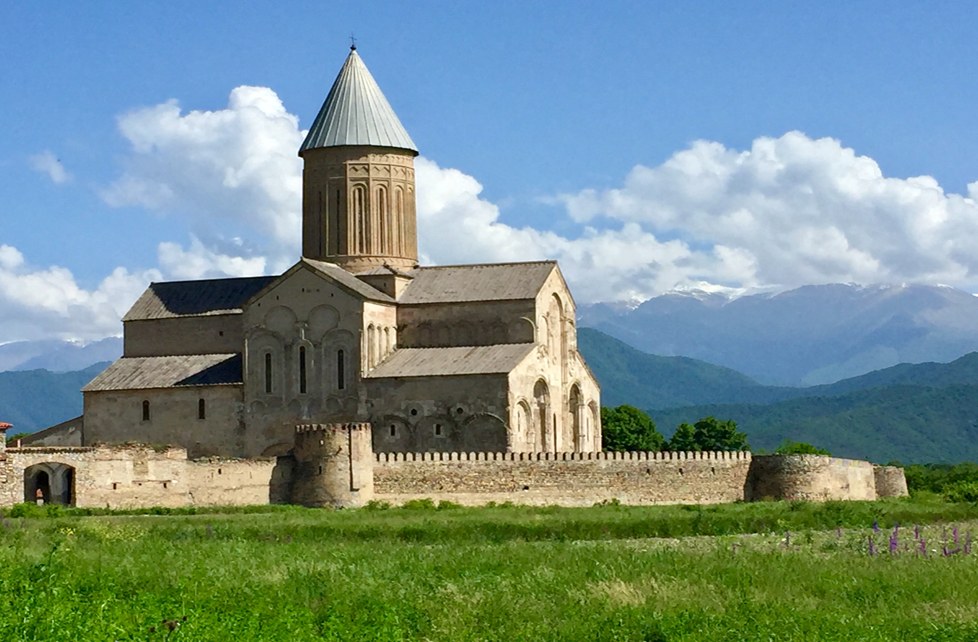 Directly opposite Alaverdi Cathedral is Badagoni Vineyards which quickly became one of my favourite wineries. 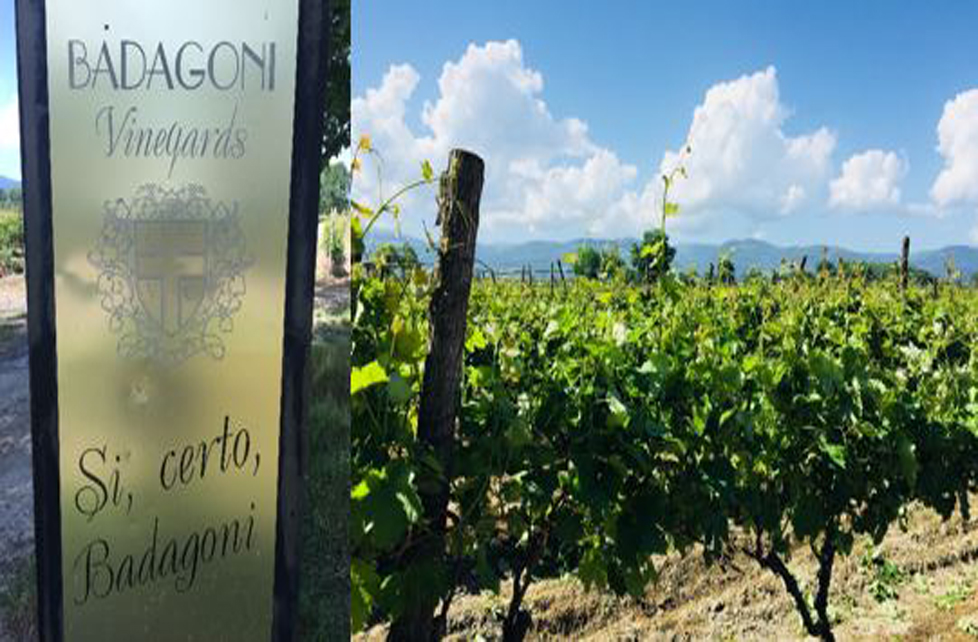 Another beautiful drive this time heading west, we travelled to picturesque Mtskheta, the spiritual heart of Georgia.  It is here we visited another hilltop Monastery, the 6th Century Jvari, with spectacular views of Mtskheta and the confluence of two rivers below, and in the town we visited Svtitskhoveli Cathedral. 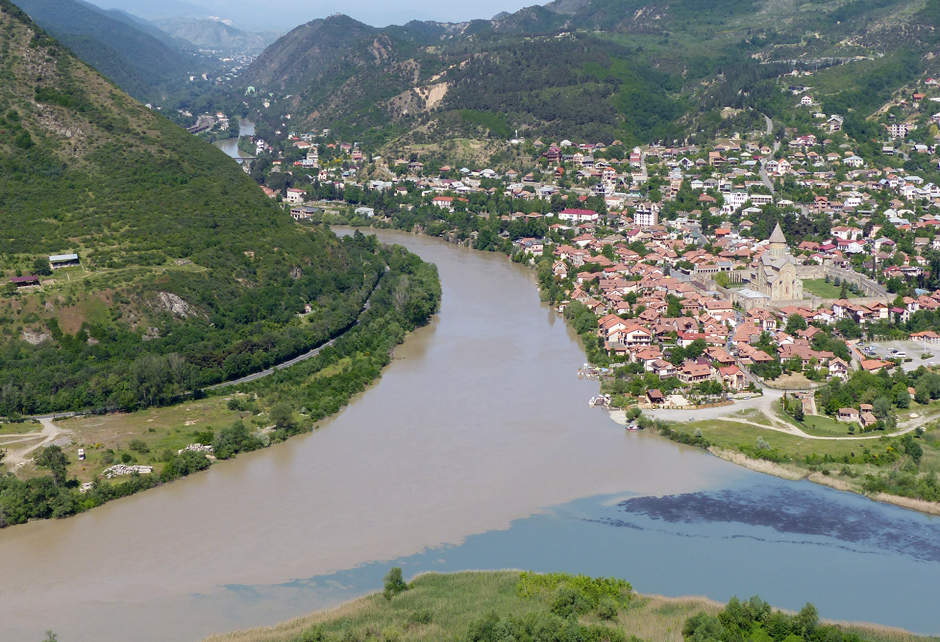 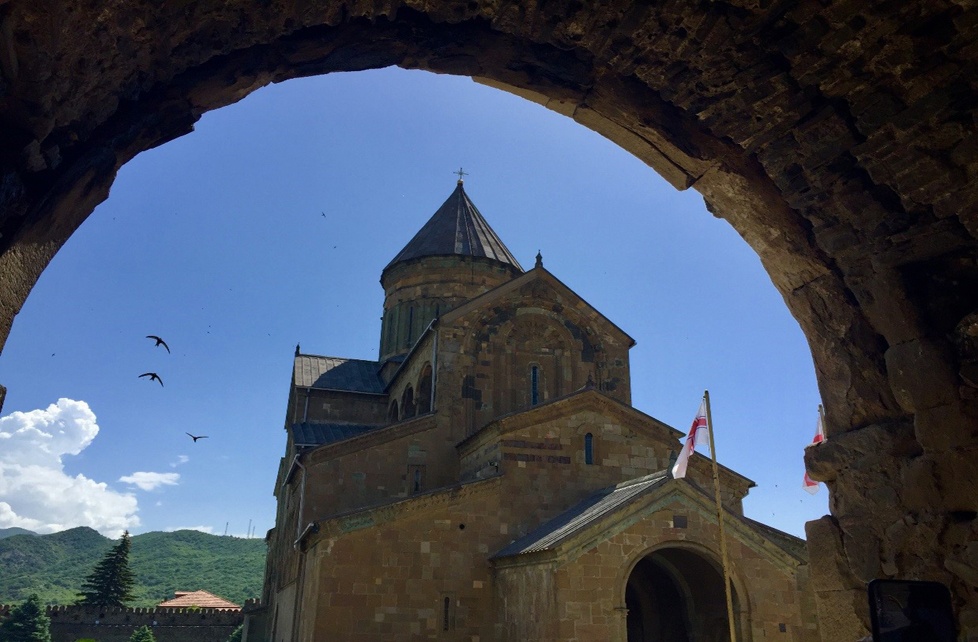 We continued along the Silk Road to our first cave town, Uplistsikhe.  Here, an entire town of streets, churches, palaces and residential buildings have been carved into the mountainside – dating from the first millennium BC. 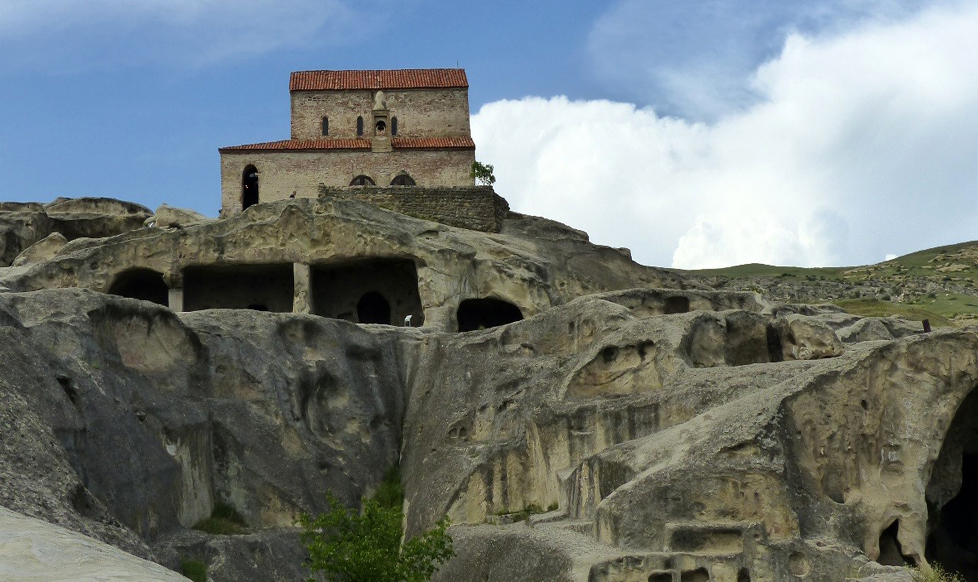 The following day we headed south to the famous cave town, Vardzia which is only 10kms from the Turkey border.  The main focus of the site is the Holy Chapel carved out of the slope in the 12th century and as you approach by road the entire site is impressive and beautiful in its own unique way. 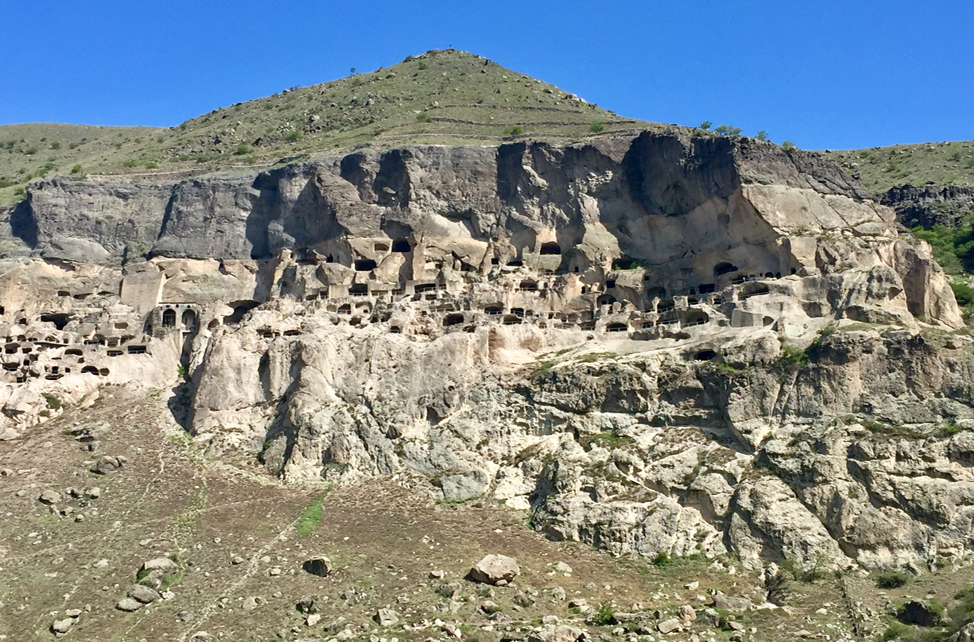 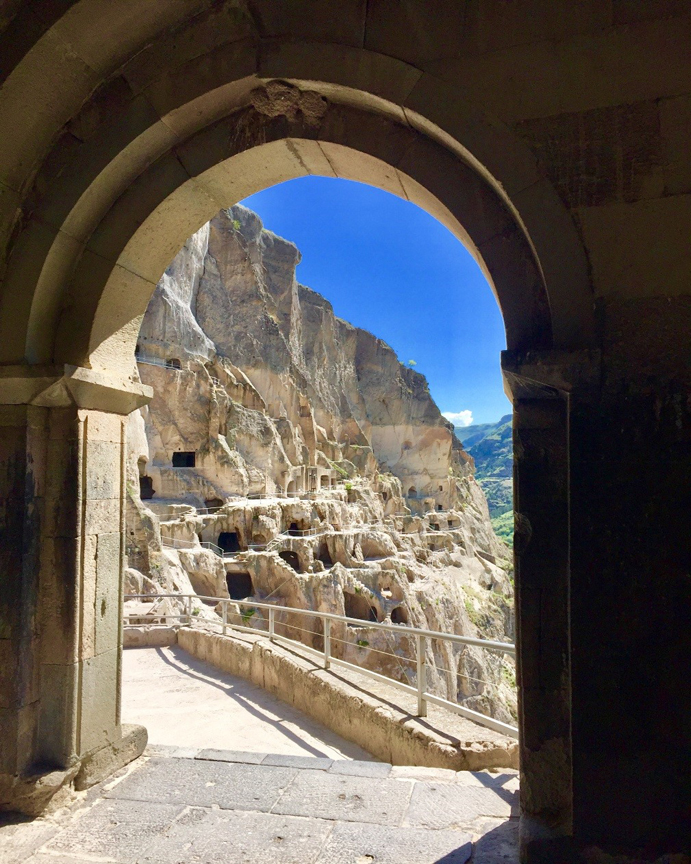 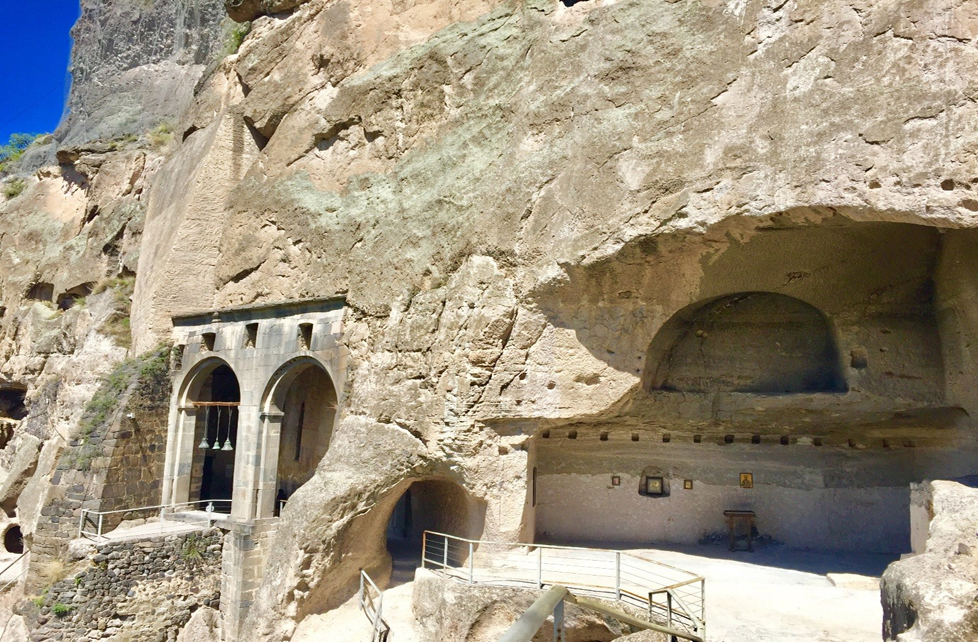 On our last full day in Georgia we drove north to Kazbegi in the Greater Caucasus Mountains.  The further north you go the more dramatic the scenery gets and as you drive into Kazbegi you are greeted with breathtaking views of Gergeti Trinity Church and Mt Kazbek the 2nd largest mountain of the Greater Caucasus located on the border of Georgia and Russia. 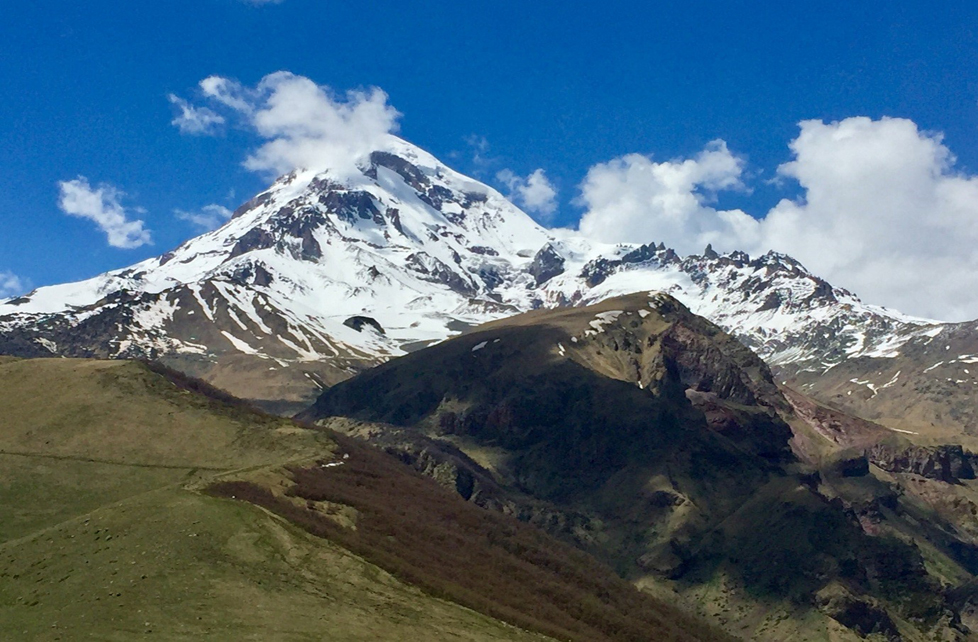 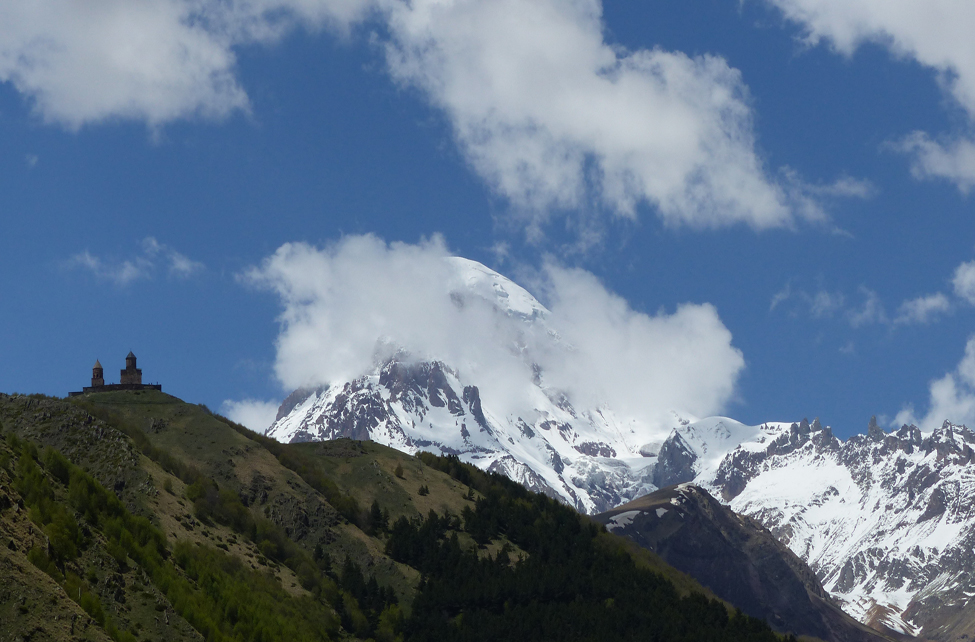 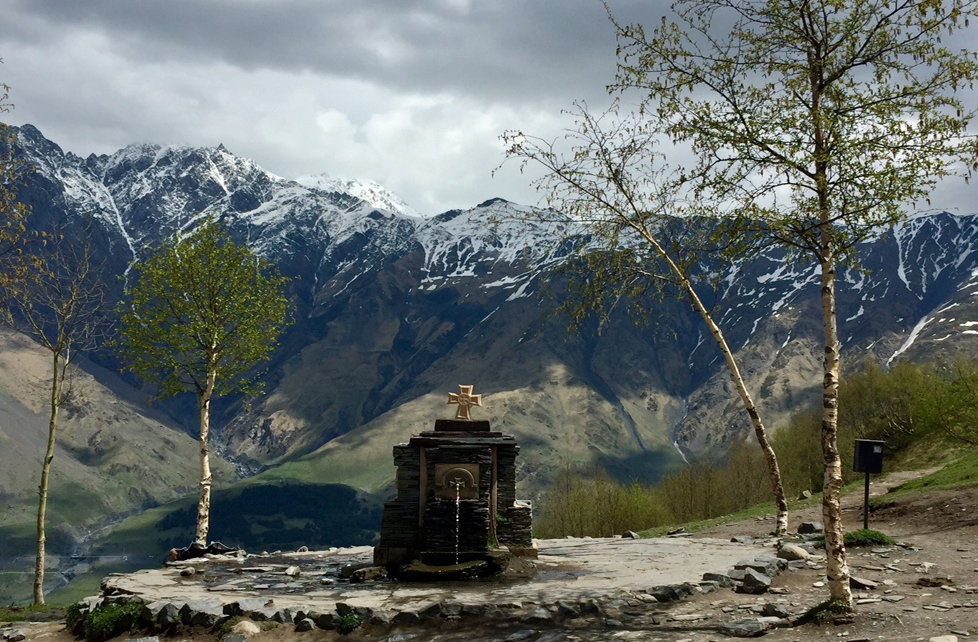 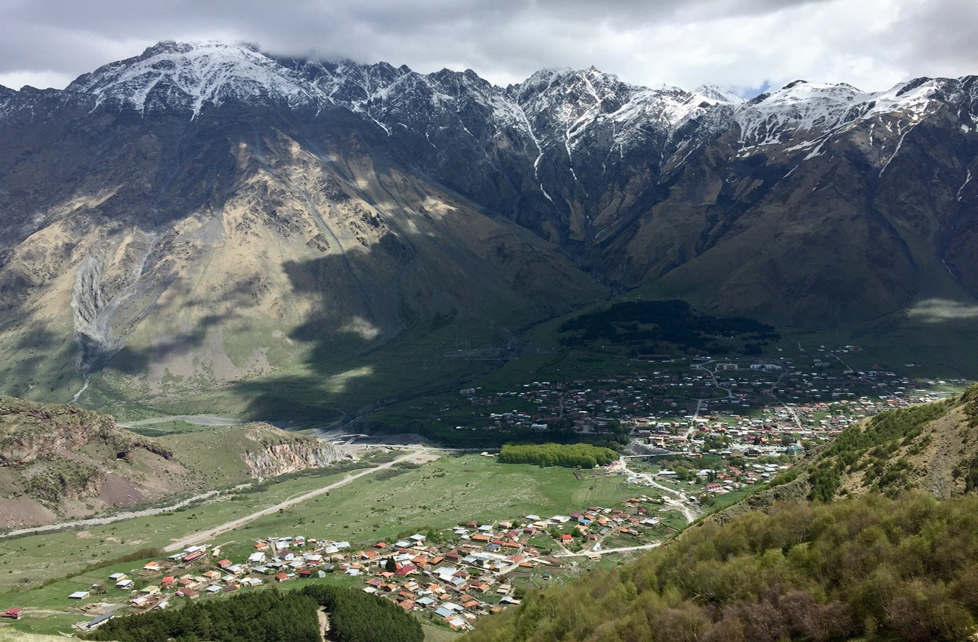 Like many travellers, I am a lover of good food and I developed a deep appreciation for the national delicacies of Georgia during my travels, for its flavours & variety. No Georgian feast would ever be complete without a good portion of Georgian cheese, freshly baked Tonis puri Bread, Khachapuri (cheese-filled bread), Tomato & Cucumber Salad, Mushrooms, Badrijani (Fried Eggplant Rolls with Walnut-Garlic Filling), Khinkali (steamed meat or vegetable dumplings), Pkhali (A paste made from spinach, walnuts, and garlic). BBQ Meat dishes & seasoned vegetables & Potatoes.
The fruit and vegetables taste like they were grown and picked fresh from your grandparents  garden and the use of herbs (tarragon, garlic, dill, flat parsley & coriander) and Walnuts took meals to the next level. Barbecued meat is very popular in Georgia with Pork being the most popular meat, followed by chicken & beef. 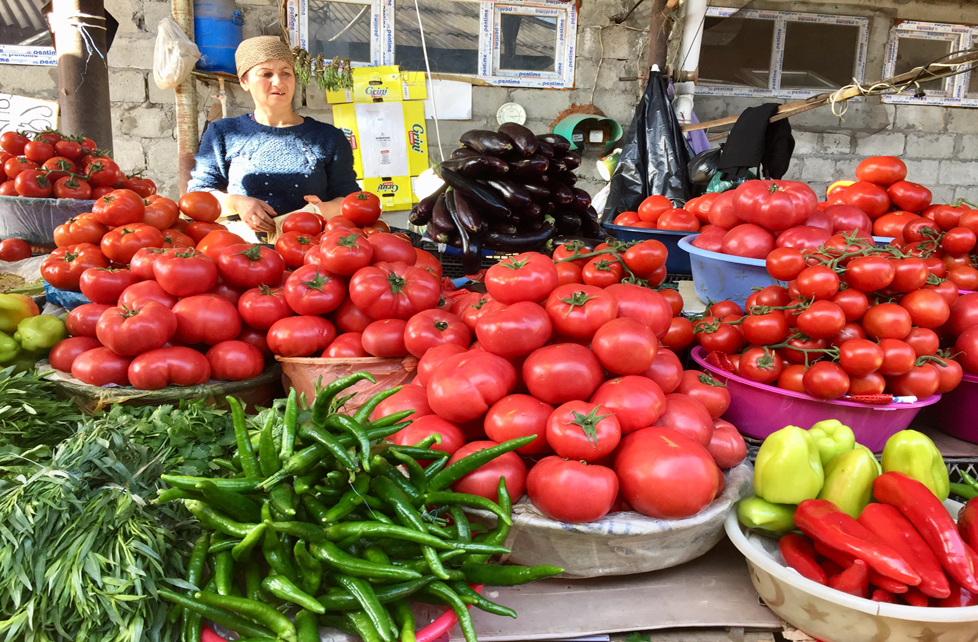 Then comes the famous Georgian wine which is one of the oldest wine regions in the world (they have been making wine for the past 8000 years). Famous for both Red & White wine, Georgian wines are usually a blend of two or more grapes so there is something for everyone’s pallet. If wine is not you’re preferred choice Georgia also make their own Brandy & Chacha (Grape Vodka – Grappa).

There is still so little that is known about this small but fascinating and beautiful country which is fast becoming a very popular new travel destination. I would highly recommend visiting Georgia soon rather than later before it becomes too well known and the crowds gather.

Travel Tips:
• Take Elastic Waisted pants – the food is delicious and plentiful so you will need the all the extra room you can get.

• You can only get the local currency (Lari) on arrival. Get small denominations ($50, $20, $10 $5 Notes) as shops and restaurants will not accept the larger notes as they do not have sufficient change.

• Keep the local currency coins as you will require (anywhere from 50 tetri to 1-2 Lari) to use the public toilets.