Posted by Nieccia Miller on 10th January, 2017 in Holidays, News

If you have EVER dreamed of going to Antarctica, fulfill your dream.
In December I returned from an expedition and it’s incredibly difficult to put into words the sights, the sounds, the smells and the emotions that I experienced. A fellow traveller said that she wasn’t sure what to expect, but her expectations were certainly exceeded – I would have to agree. Congregating in Ushuaia, Argentina for what was to be the trip of a life time for most, the excitement was clearly building. We were about to embark on an 18 day/19 night cruise taking in Falkland Islands, South Georgia and the great White Continent, Antarctica.   Everything about this part of the world is unspoilt, it is pristine and has some of the most incredible scenery and wildlife on this planet – a photographer’s paradise – icebergs, penguins, whales, so many birds, seals, spectacular sunsets. 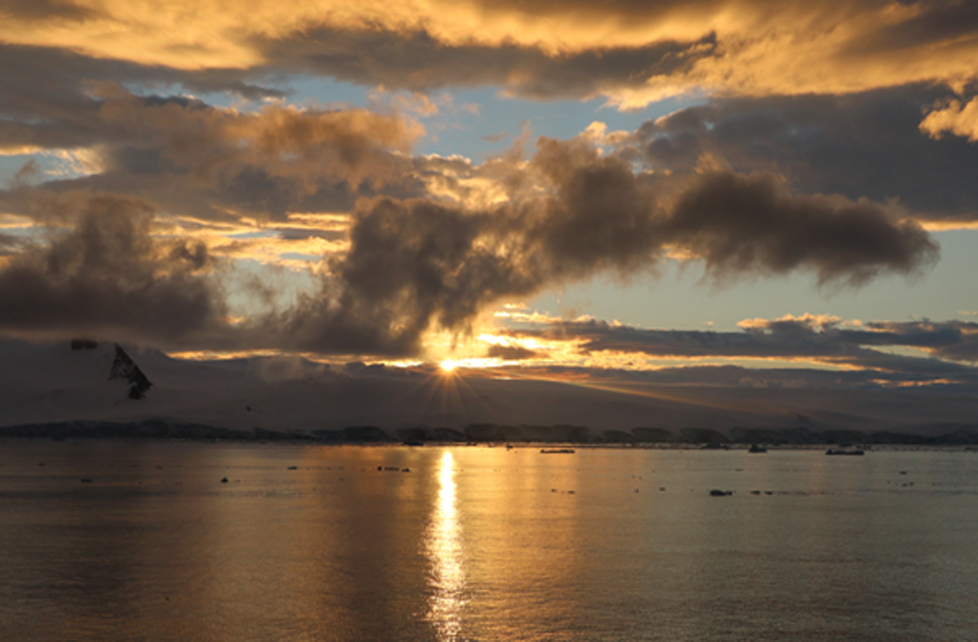 With sea sickness medication at the ready, we were bound for the Falklands Islands (Islas Malvinas), possibly best known for the 74 day conflict between Argentina and the United Kingdom in 1982.  Day’s at sea were occupied with very informative and educational presentations by the various on board guides, naturalists, photographer, artist and historian, leaving plenty of time to be out on deck with camera and binoculars poised in search of anything other than waves. We landed at both West Point Island and Carcass Island, being our first encounter with Gentoo, Rockhopper and Magellanic penguins and nesting Black-Browed Albatross, before stopping at Stanley – the capital of Falkland Islands. Boasting a population of about 3,000 and an additional 2,000 Naval personnel, Stanley is the hub of the Falkland Islands. A short bus tour took us via the Lady Elizabeth, still intact and partially beached in Whale Bone Cove, to Gypsy Cove, Yorke Bay – a pristine beach, and a migrating Magellanic penguin colony.  The entire northern coast of the Port Stanley Airport peninsula (including Yorke Bay) has been fenced and marked as strictly off-limits due to possible undetonated minefields remaining from the war. No visit is complete without spending time at the historic heart, Falkland Islands Museum and National Trust of Stanley. With galleries covering maritime history, the 1982 war, Antarctic Expedition memorabilia and so much more. 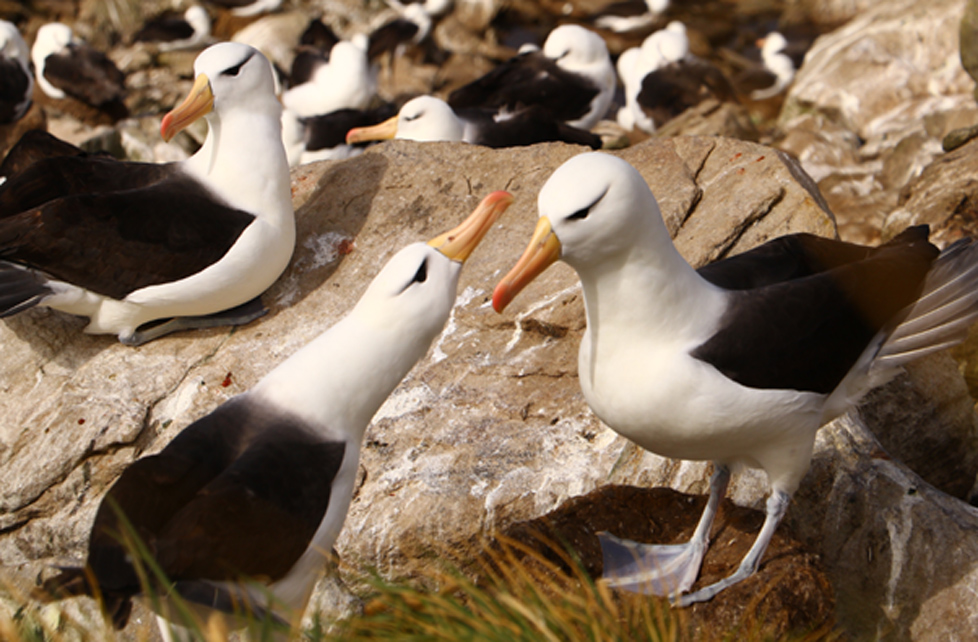 Our next land sighting would be South Georgia. I had read and seen so much about the inhabitants of South Georgia, that it was breathtaking to finally view the hundreds of thousands of King Penguins, adults and brown fluffy molting chicks, spread along Salisbury Plain. Sharing the beach with thousands of both Fur and Elephant Seals the smell was quite overwhelming. Other landings on South Georgia included Fortuna Bay, Grytviken, Royal Bay, Gold Harbour and sailing into spectacular Drygalski Fjord with towering snow covered mountains either side, depicting a winter wonderland. There are a number of abandoned whaling stations from the whaling era of the early to mid 1900’s – Stromness Harbour, Leith Harbour and Grytviken. Large swells didn’t allow us to land at Stromness, also the destination of Sir Ernest Shakelton’s rescue in 1916, however we did visit his grave site at the cemetery at Grytviken, which is also where his “right hand man” Frank Wild’s ashes were spread. The beach at Gold Harbour is littered with round-eyed elephant seal weaners abandoned by their mothers after weeks of providing huge quantities of fat rich milk. Now fasting, they become increasingly playful and inquisitive and eventually hunger drives them to the sea where they learn for themselves the skills of hunting. Many passengers were nudged and approached by the curious pups having a wildlife experience like no other. Our journey continued towards the peninsula, with huge ice bergs coming into view and  finally sailing into Antarctic waters, we headed for Elephant Island, Point Wild, where the heroic journey of the James Caird crossed the Scotia Sea with Frank Wild and 22 men, who survived 4 and a half months before relief arrived. 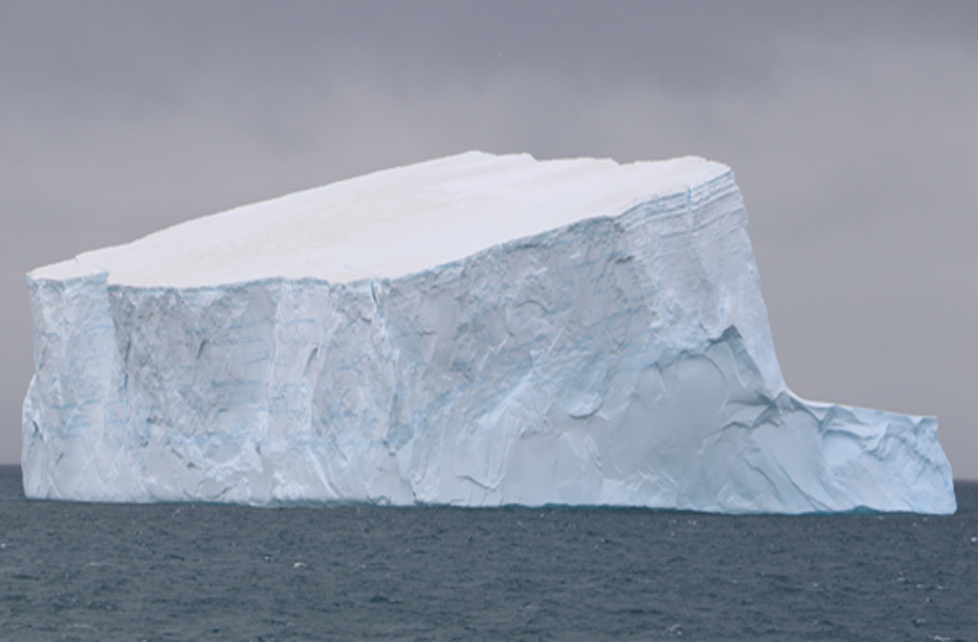 Headed towards Antarctic Sound, we finally sight Antarctica and the Ioffe is now continuously flanked by ice bergs (tabular), whales (Fin and Minke) and countless birds (petrel, albatross, gulls and skua) as we quietly make our way through the calm waters to Paulet Island and Brown Bluff. Paulet Island is the home to about 100,000 pairs of Adelie Penguins and a colony of Imperial Shags, nesting side by side.  The volcanic landscape of Brown Bluff and true Antarctica soil, was for many passengers, including me, setting foot on their 7th and final continent. One big difference compared to Falklands and South Georgia was the lack of vegetation as only lichens, mosses, and algae can grow in the much harsher environment. We were experiencing almost 20 hours of daylight which brought spectacular sunrises and sunsets with tabular icebergs making the perfect model. 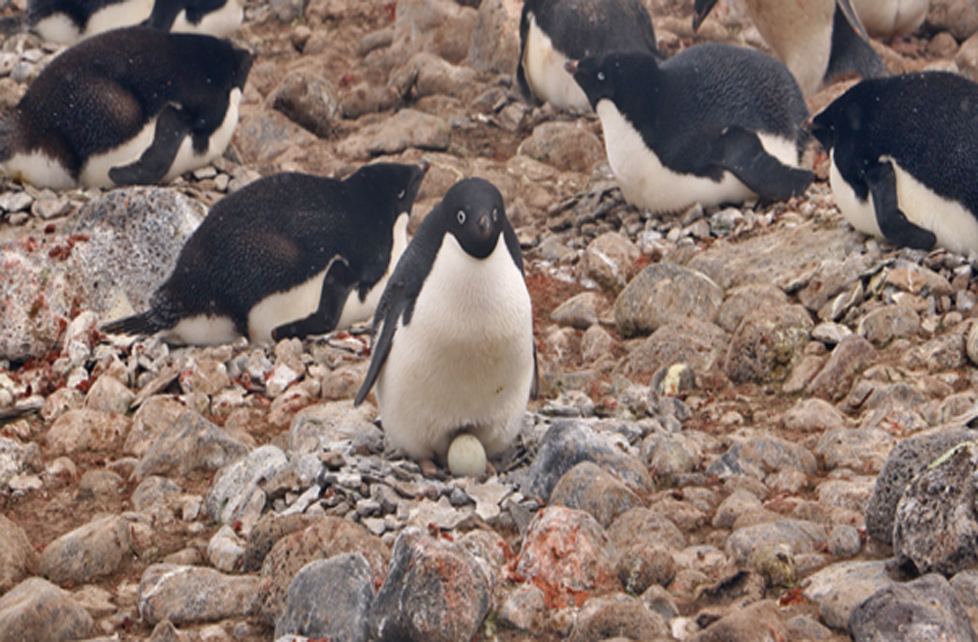 I had the opportunity to kayak at Brown Bluff which was truly majestic – slipping between the ice, with Adelie and Gentoo penguins porpoising all around us. Our final destination for this kayak was atop of an ice floe – something I will never forget. Our route was being followed by 4 inquisitive Crabeater seals that raised their head next to the floe we were on and then continued on their way. Our dinner that evening was a BBQ on deck in the falling snow. 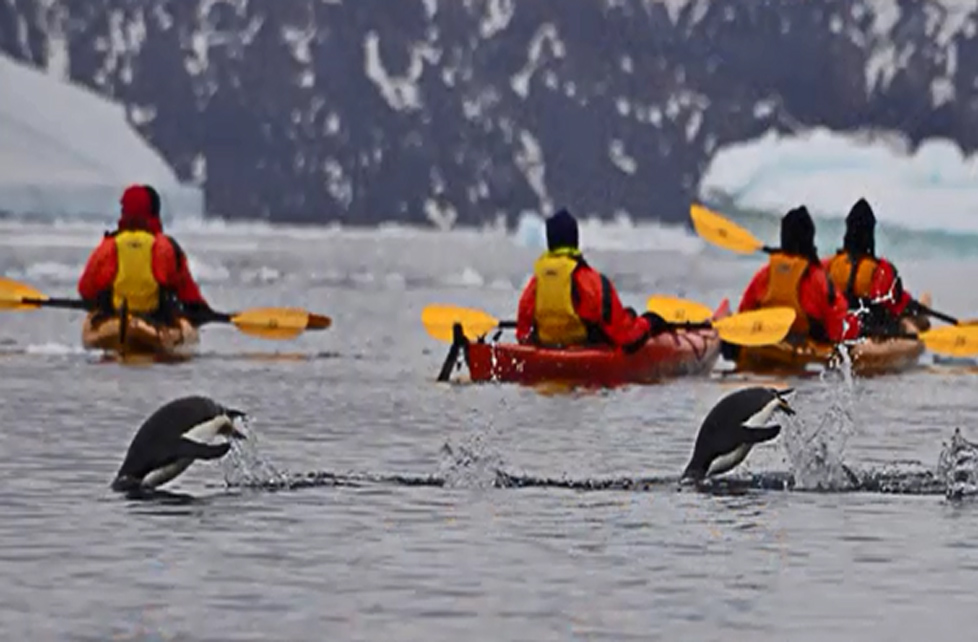 Half Moon Bay, in the South Shetland Islands archipelago, with it’s colony and rookery of Chinstap penguins, was bathed in sunshine for our arrival – layers of clothing were removed. It is also the home to an Argentine Antarctic Survey Station – Camara Base. Our afternoon excursion saw us sail to Deception Island, which is the caldera of an active volcano. The zodiac’s took us ashore at Whaler’s Bay which is yet another abandoned whaling station from the early 1900’s and also the site of the “polar plunge”. After a couple of hours on the black sand beach, which included walking up to Neptune’s Window for a spectacular view of the volcano, it was time to take the plunge and of course the wind had picked up from the time that we had originally landed. About 15 passengers stripped down to their swim wear and entered the chilly water. Yes, it was cold – live life with no regrets. 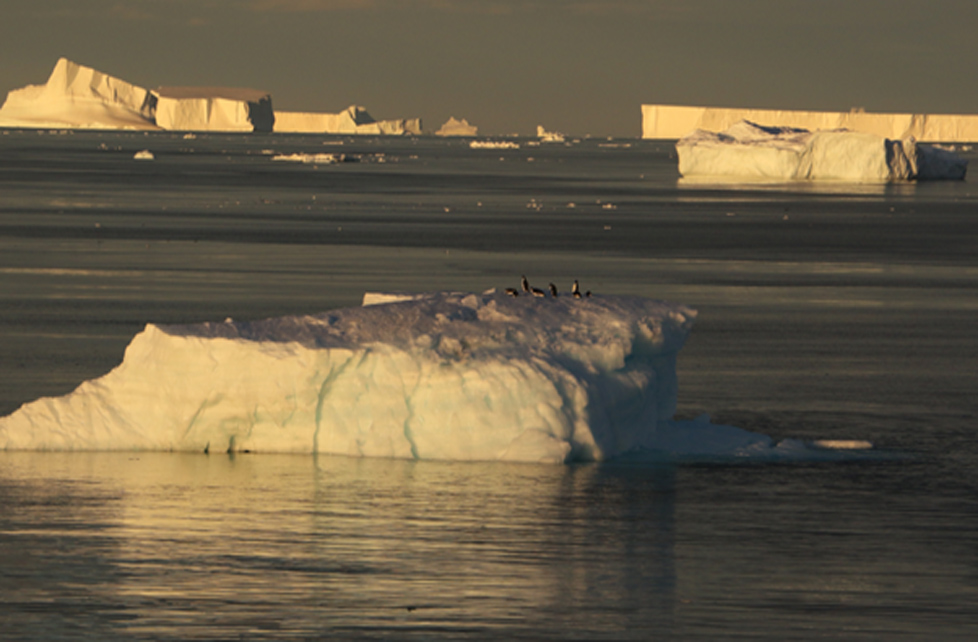 The following day took us to our mostly southerly point, Port Lockroy – an abandoned British Base and currently home to 4 staff for the summer months. Port Lockroy has been renovated into a museum and souvenir shop and is one of the most popular tourist destinations for cruise ship passengers in Antarctica. Half the island is open to tourists, while the other half is reserved for Gentoo penguins. 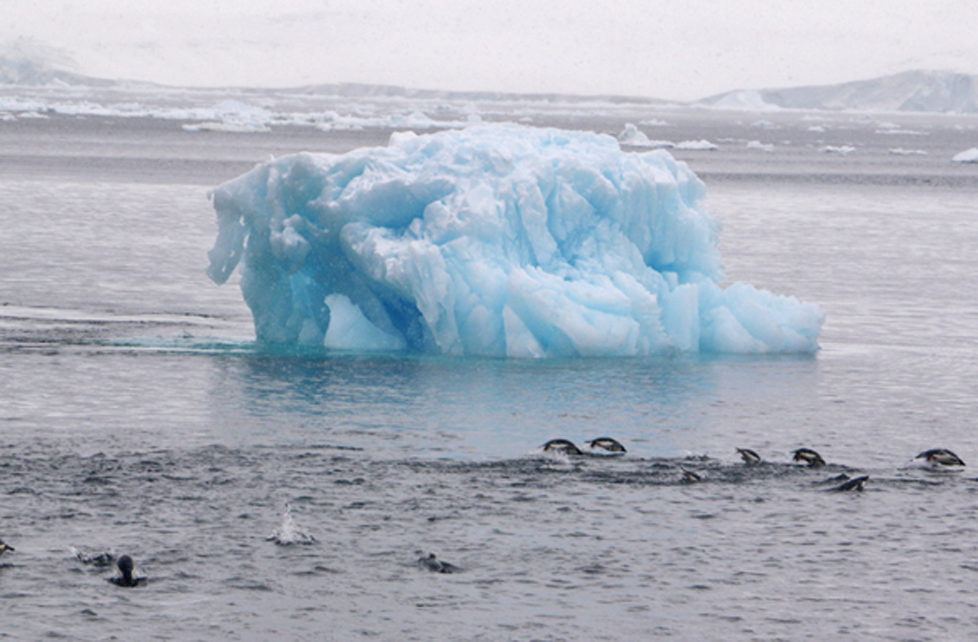 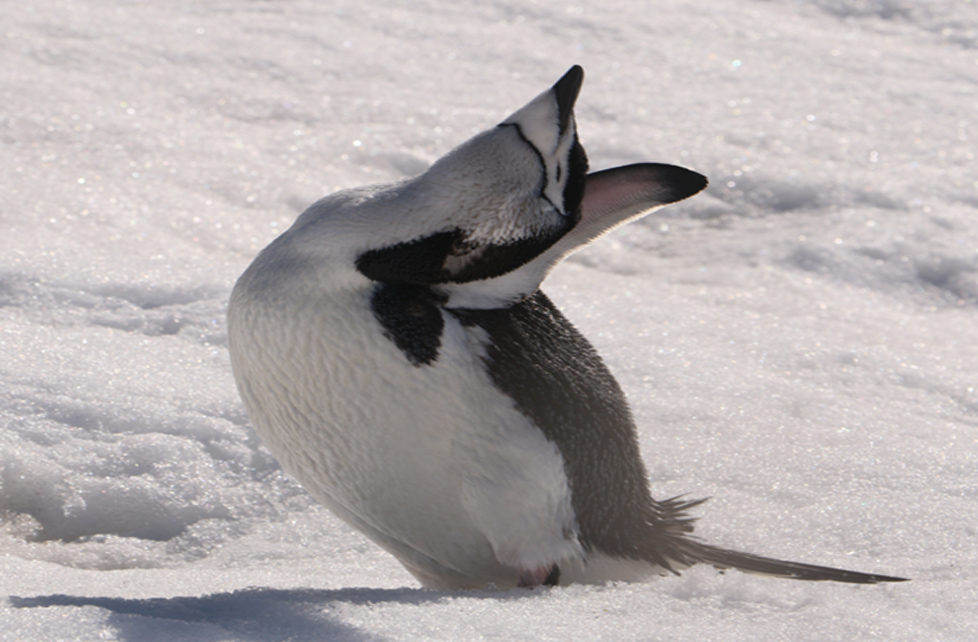 Wilhelmina Bay, or sometimes as it is known, “Whalehelmina” did let us down with the number of whaling sightings, however Melchior Islands did not. 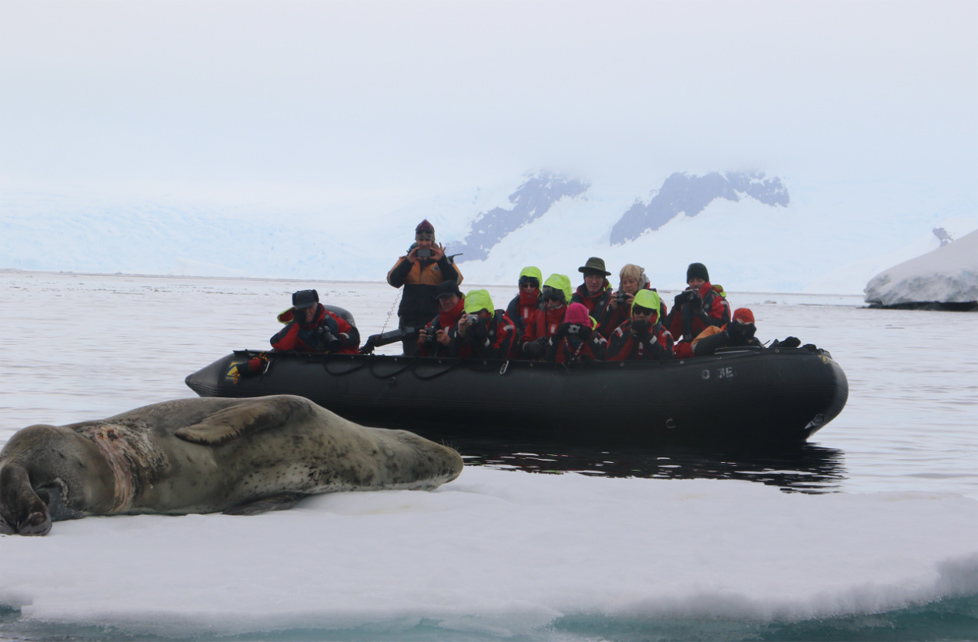 Our zodiac cruise in the afternoon was very memorable with quite a number of Humpback Whales within close proximity of the zodiac’s – everywhere we looked there was a whale fluke, a blow or a back and a dorsal from a whale swimming by, feeding or just doing whale stuff, as they do. 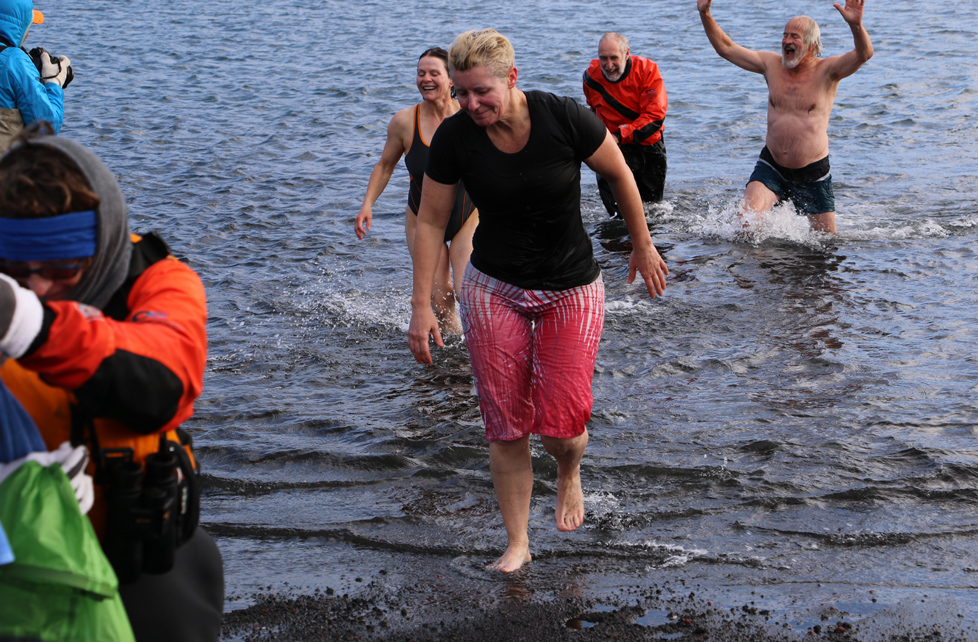 It was then time to head for home, well Ushuaia, via the famous Drake Passage. Thankfully the weather gods were rather kind to us and we headed round Cape Horn back into the calm waters of the Beagle Channel to disembark at Ushuaia, where we farewelled the amazing staff of the Ioffe and new found friends.