I am flying over the sparkling expanse of the Mozambique Channel to one of the most exotic, forgotten and ecologically diverse islands on the planet, Madagascar.   My first glimpse of this fabled island was not really as I imagined as what I saw, initially horrified me – smoke and fire.  Not one or two fires, but dozens, burning the land and sending dirty grey plumes spiralling upwards into the skies like mini tornadoes. Little did I know that my first impression of the island would be totally reversed when meeting its warm people, seeing its unique wildlife and spectacular landscapes which would takes us on a spell bounding journey. 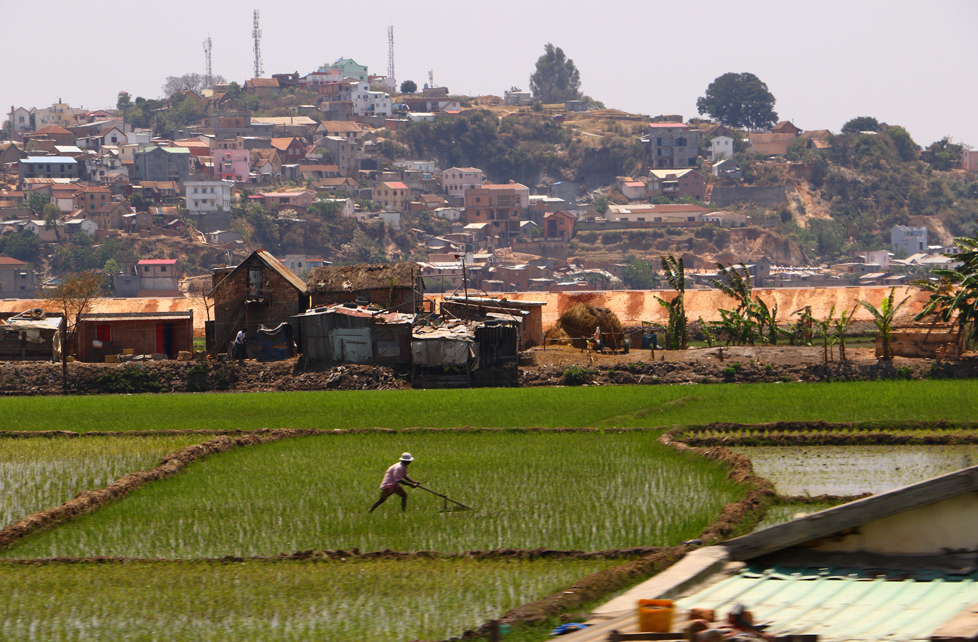 Our arrival into the capital Antananarivo was, as expected of any large African city – vibrantly colourful, crowded, raised voices in foreign languages firing back and forth, general chaos, traffic jams with no lights, houses and shacks stacked upon each other creating terraces of haphazard homes, dusty, spicy, musky. The capital is a culmination of Indonesian, French, Arabian, Indian, British and authentically African influences, history and heritage.

From the airport we bypassed the outskirts of the capital and drove along the hair-raising, narrow hill passes to the sanctuary of Andasibe National Park, 3 hours from Antananarivo. With very little in terms of infrastructure and no national rail system, the majority of supplies are transported throughout the country by a multitude of ant-like trucks. We arrived at night, tired, wired and in need of a good night’s sleep as the hunt for lemurs was scheduled for early morning. 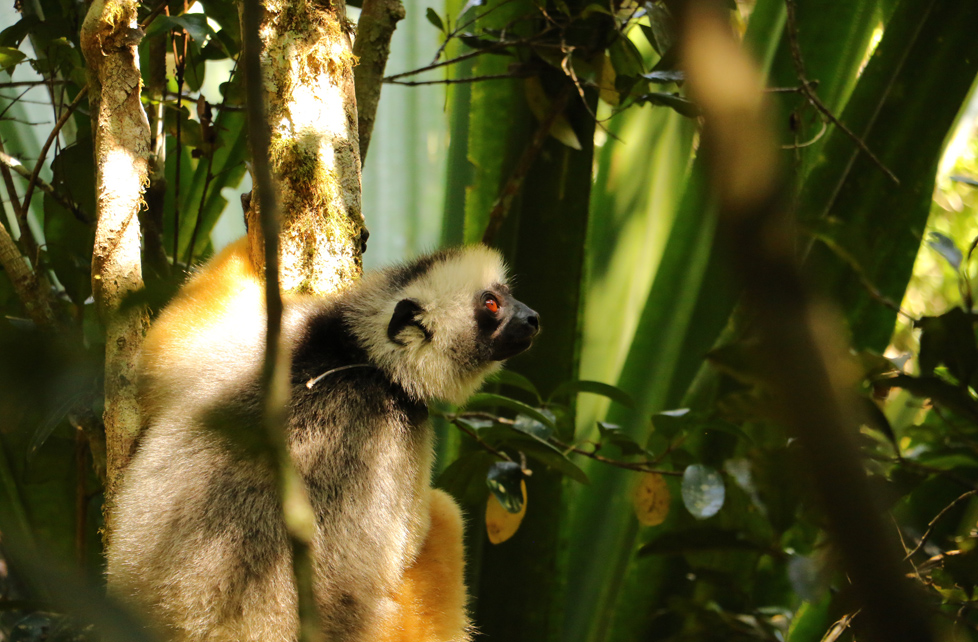 As the sun cracked over the inky horizon, I was awoken by the hauntingly beautiful call of Indri lemurs living in the forest which surrounded our lodge. Their morning song created a euphonic chorus which echoed eerily across the misty morning canopies. Within an hour we were trekking deep within the Andasibe National Park, completely surrounded by dense rainforest vegetation as we eagerly searched for these unique creatures.

To listen to a short video of Indri Lemurs singing their morning song in Andasibe National Park, click here 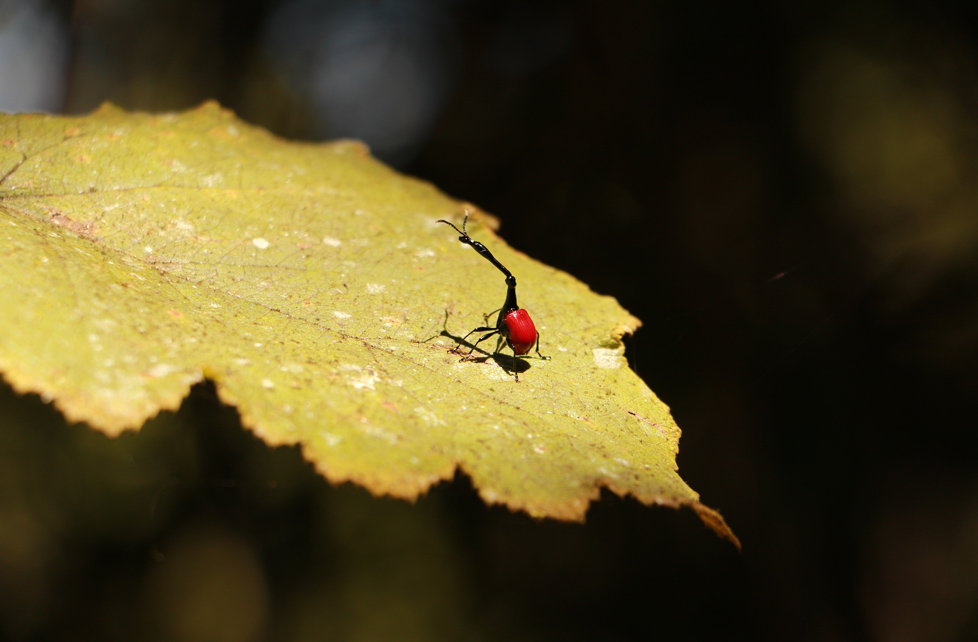 We came across a small family, perched comfortably in the treetops, basking in the morning dappled sun. These curious primates are the largest of the lemurs and highly endangered. The locals call the Indri “Babacoote” or “Babakoko”. Malagasy legends believe the Indri is the father of mankind and the ancestor of man.  As the story goes, an Indri once saved a little boy from certain death in the forest. The local Malagasies revere the Indri and believe it is “fady” or extremely taboo to hunt the babakoko – this is what has probably saved them from certain extinction. 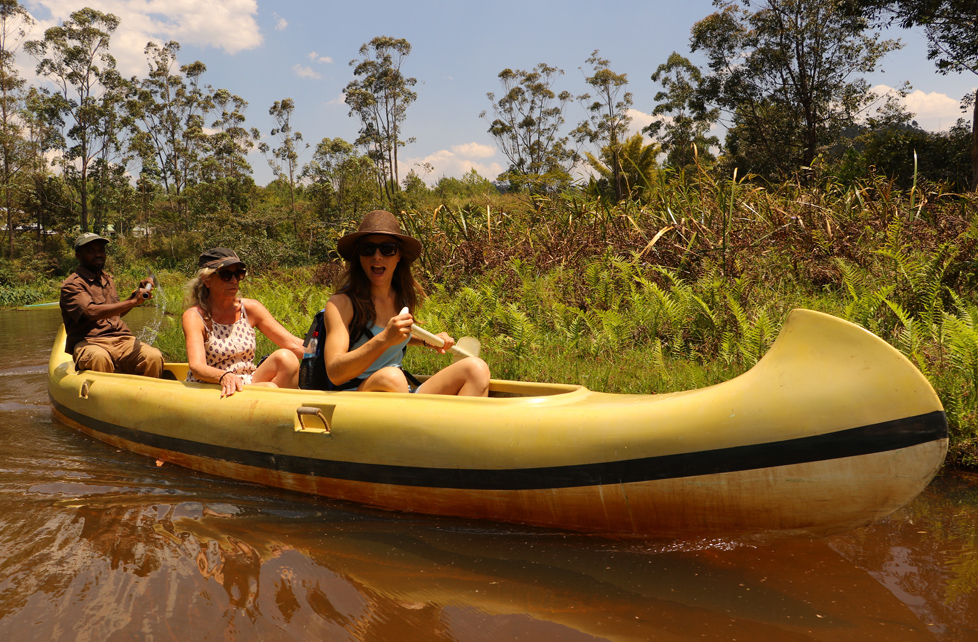 If I thought their earlier distant calls were incredible, I was totally in awe when the family started to sing their morning symphony three meters from where I was standing. It was spine chilling, it was enchanting, it was primal and I felt so blessed to have witnessed that animal’s call. After leaving the Park, nearby Vakona Lodge has created a protected private reserve where travellers can get close to tame lemurs (Vakona Reserve) which are enticed on to your head by delicious bananas. 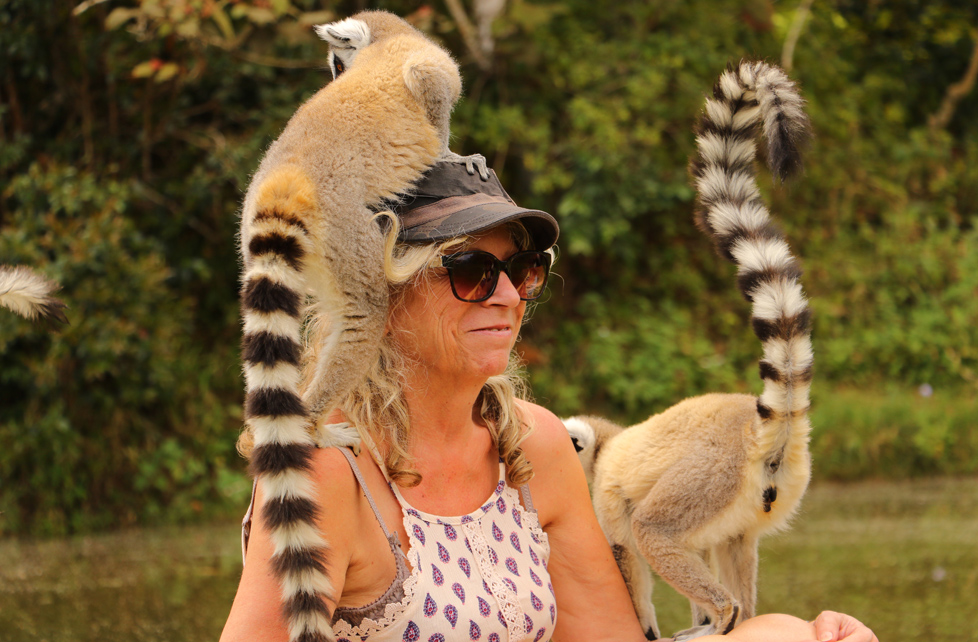 A beautifully serene kayak paddle to a nearby island allows you to meet a troupe of mischievous Ring tailed lemurs and watch their comical antics. 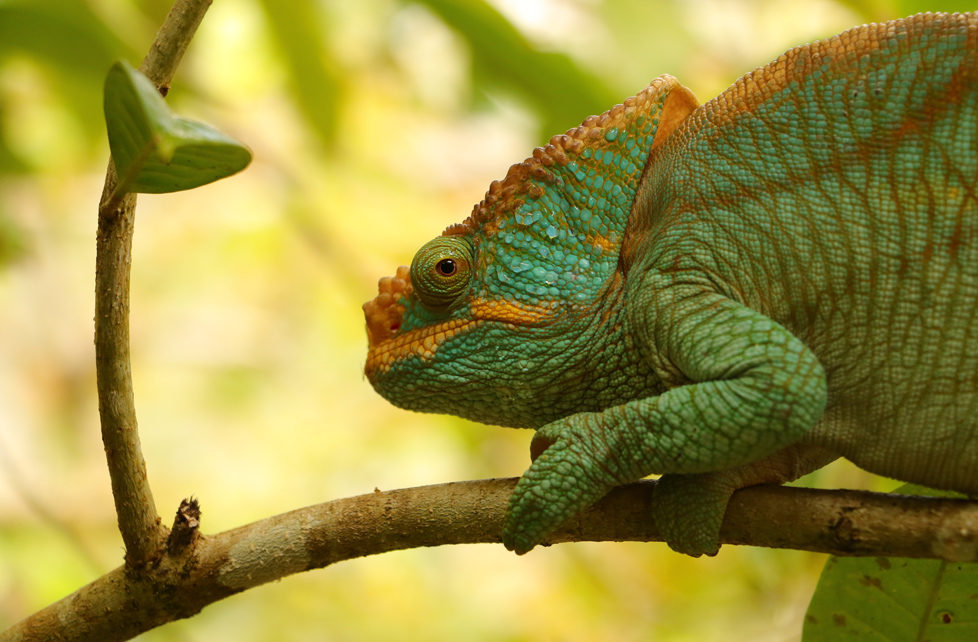 To get down to the thermal waters of Ranomafana National Park we needed to drive approx 530 km south east. Now in many other counties this would be quite achievable, in Madagascar however this would take us nearly 2 days. The many shades of the Madagascan landscapes and her humble people drifted past my car window in those dreamy- trance like days. 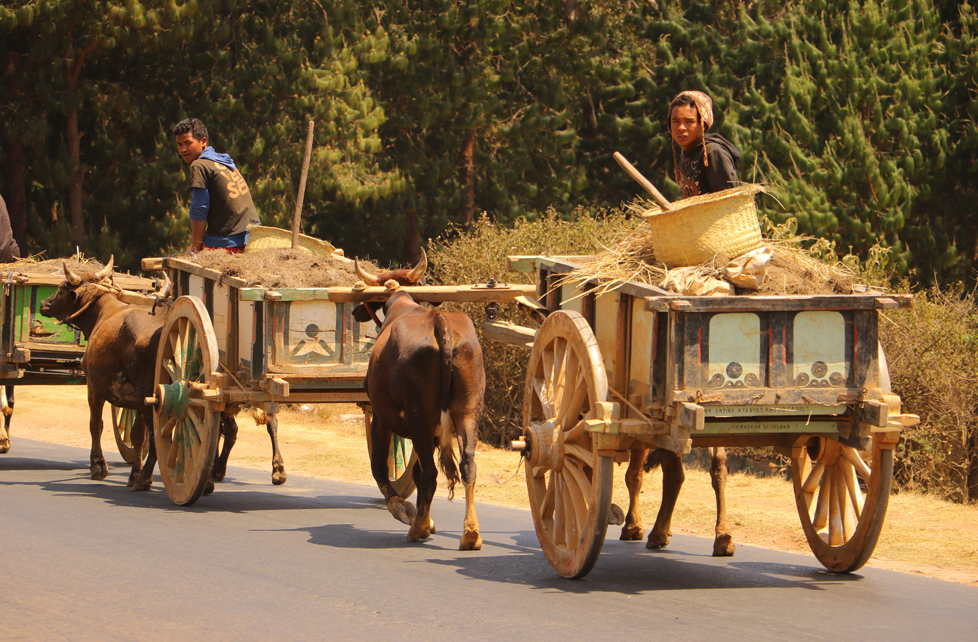 Vermillion hills with expertly chiselled rice terraces, clouds reflecting on the water-filled lime green rice paddies, winding roads which disappear beyond the horizon, farmers ploughing their land with equipment reminiscent of a bygone age, gathering crops as their Zebu gaze in the heat, local kids cheekily dancing in front of the cars chasing the elusive “sweetie”, sprawling busy towns to sleepy tribal villages, soaring rainforest peaks to dry arid deserts.  We saw it all. 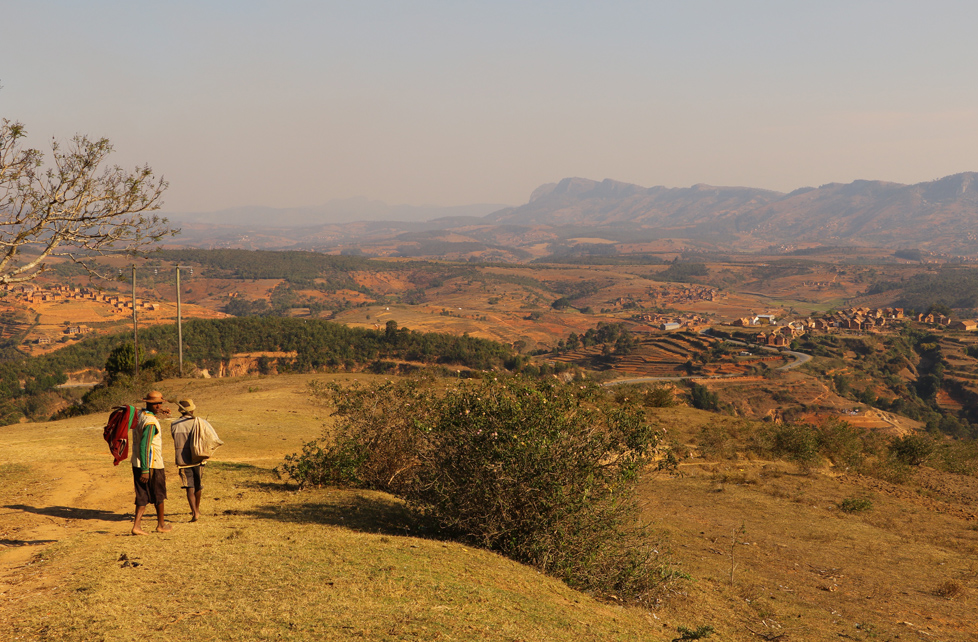 An early morning start saw us entering the iconic Ranomafana National Park, meaning “place of hot water” in Malagasy due to the thermal springs which can be found here. Ranomafana is like the lungs of the island, home to thousands of ancient trees, creating a unique haven for man and animal alike. The air is sweet, clean and pure. 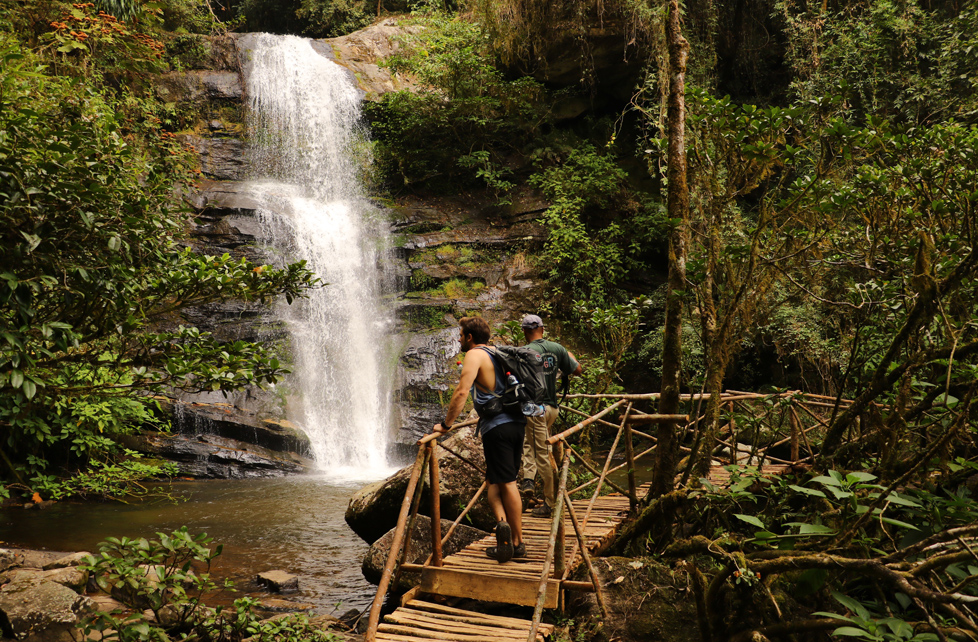 The park is stunningly beautiful, deep valleys covered in dense dark green foliage, lush tropical plants drip water on our shoulders as we pass by, ancient vines locked in a slow suffocating dance with each other as brightly coloured mushrooms sprout at their base, spiders spin intricate webs across their branches and waterfalls tumble endlessly into the river chasms. 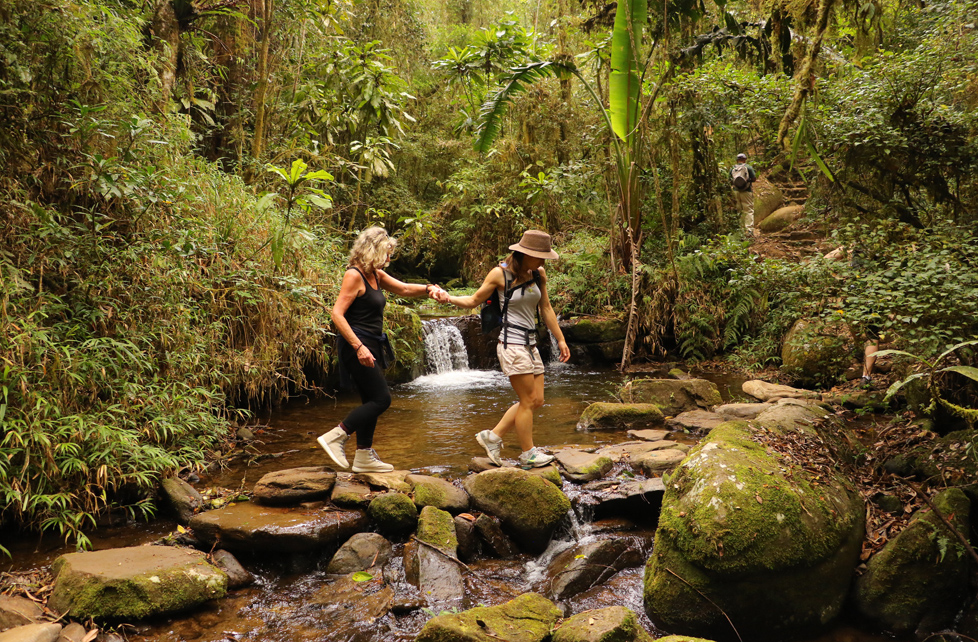 One can only imagine what Madagascar was like a 100 years ago when its people referred to the country as the “green island”, sadly it is now called the “red island” as 80% of prime rainforests like Ranomafana have been cut down for subsistence farming, development of infrastructure, trade and just plain old corporate greed. The local people receive little to nothing from the government, whilst corporations line their pockets with millions worth of natural resources from the irreplaceable island. I know this is not a new story but Madagascar is listed as the 6th poorest country in the world, with its abundant and unique natural resources, it should be in a better place. If we lose this island, we lose a rare ancient ecosystem, a collection of animals and plants endemic to this island only. 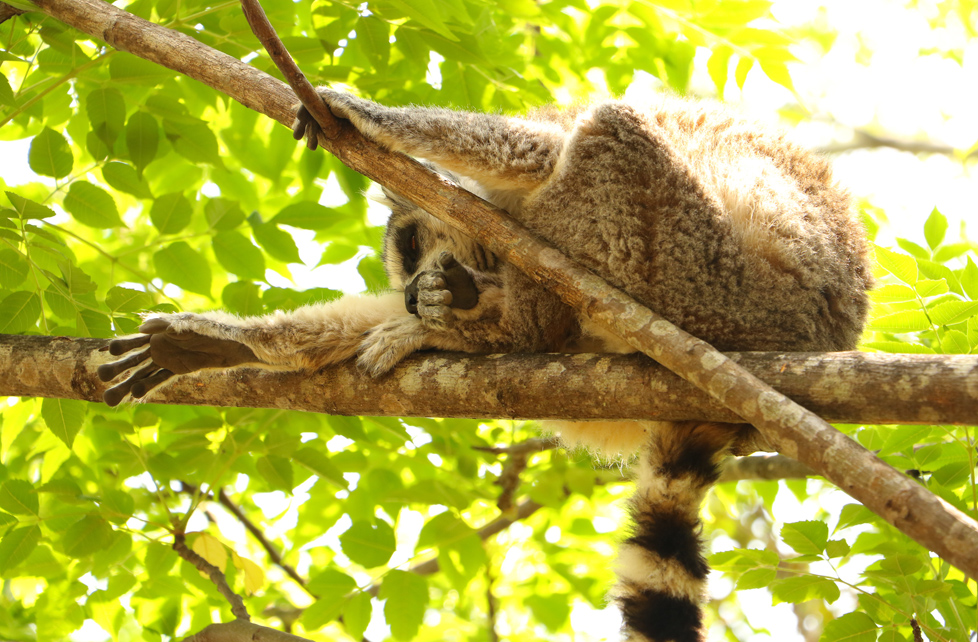 As this park is rather large with infinitely high trees, it was quite challenging seeing its prime attraction the Golden Bamboo Lemur, this adorable looking lemur had us running along the steamy forest ground for hours until we finally gave up and decided to trek instead to the waterfall and enjoy a morning picnic. 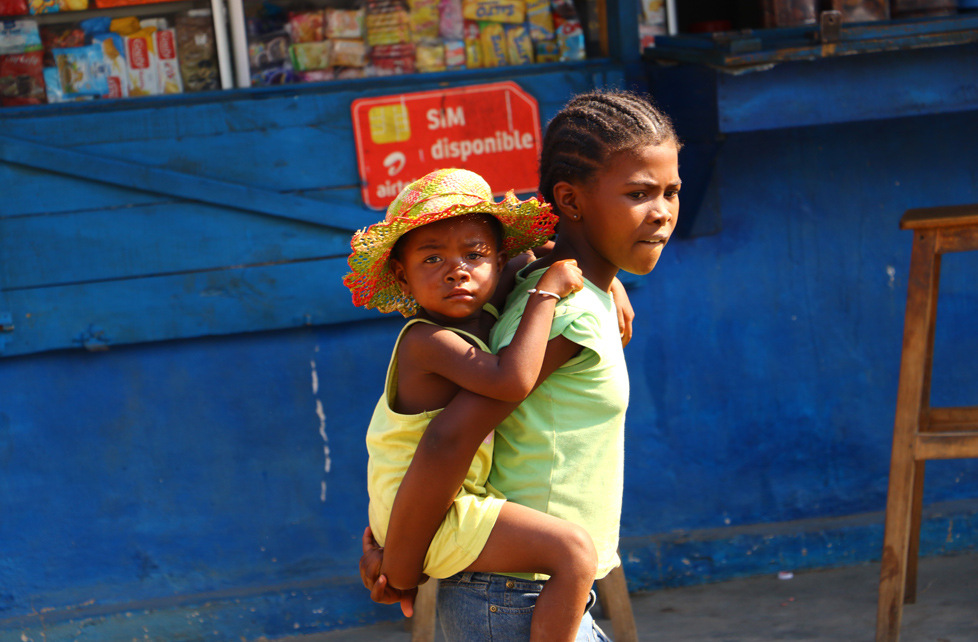 In the afternoon, we embarked on an impromptu 2-3 hour kayak trip down Namorana River and as there are several rapids we were advised not to bring any cameras and it was probably the worst decision I ever made. The scenery was breathtaking.  The river was still as glass and it reflected all the activities along her muddy banks from children fishing on makeshift bamboo rafts to a solitary canoeist paddling silently under the shade of the riverbank trees.  Banana and litchi plantations swayed in the breeze as pied-kingfishers swooped down to catch dinner.  Navigating the smooth flow of the river in the afternoon twilight was just magical. 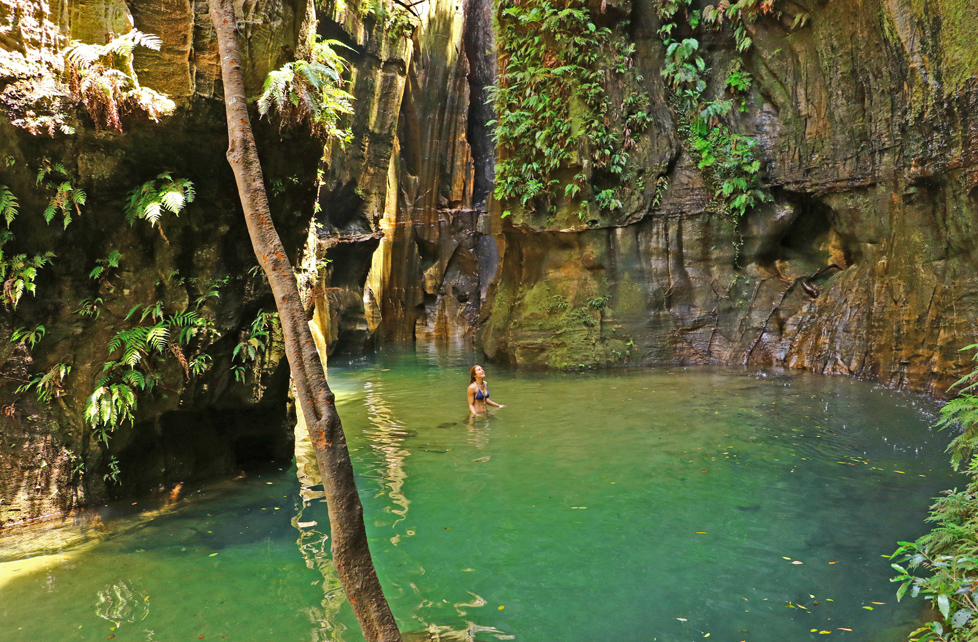 Another day of driving took us to Isalo National Park where we spent the next day trekking in the beautiful red ochred desert canyons. Initially upon arriving through the gates of the park entrance, the landscape is crackling dry, the heat is suffocating and the savannah expanse is endless. As you start walking through the canyons, the most incredible change comes to life. The deep canyon floors reveal shaded oasis’s with lush vegetation hanging from the cliff rocks, multicolored butterflies drift over your head, cascading streams run into turquoise pools, where the exhausted trekker can swim and be rejuvenated by the soul-cleansing waters. Unfortunately we did not see the parks iconic lemur, the white “dancing” Sifaka but came across several camouflaged chameleons, tropical bee-eaters, falcons and electric pink dragon flies. This place is a little Garden of Eden hidden by the unassuming desert. 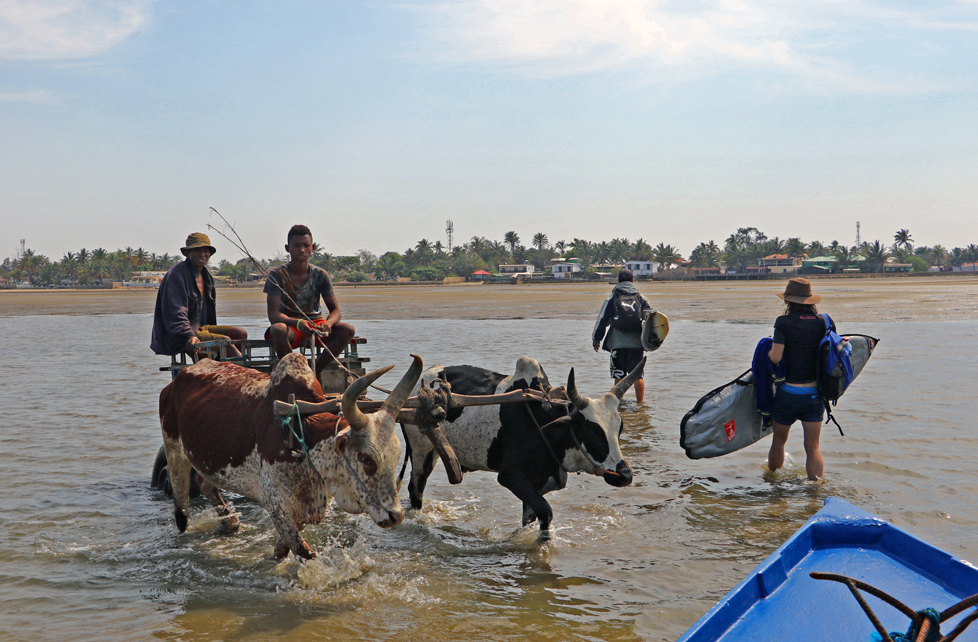 For the rest of our stay on the island, we stayed in the tropical coastal town of Ifaty in Tulear, where long lazy sun kissed days were spent surfing, snorkelling the reefs, exploring the colourful town and sampling the fresh seafood on offer. On the advice of an Australian expat, we left the comfort of our beach resort and took a pirogue trip to a secluded village nestled on a spectacular island atoll. 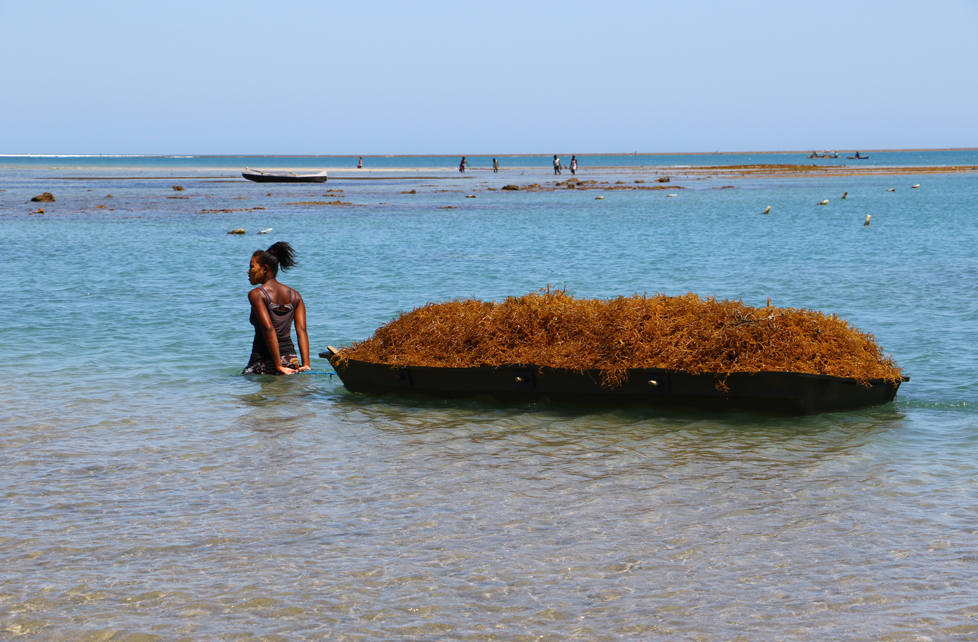 The night spent here,  which although was very basic in facilities, was rich in experience and rewarding in humility. Life on this island is what it was probably like a hundred years ago and time is defined only by the incoming tide and the rise and fall of the sun. With five different surf spots to choose from, some of the best home cooked Malagasy meals and a hoard of cheeky island children to entertain you, this place definitely left a mark.

French is the dominant language that’s spoken so it’s good to know a bit of the lingo in advance. Driving from location to location, takes days, so if you can afford to fly internally do so, it will save you so much time.  I enjoyed the food, its simple yet wholesome and organic; don’t expect fine dining French cuisine. 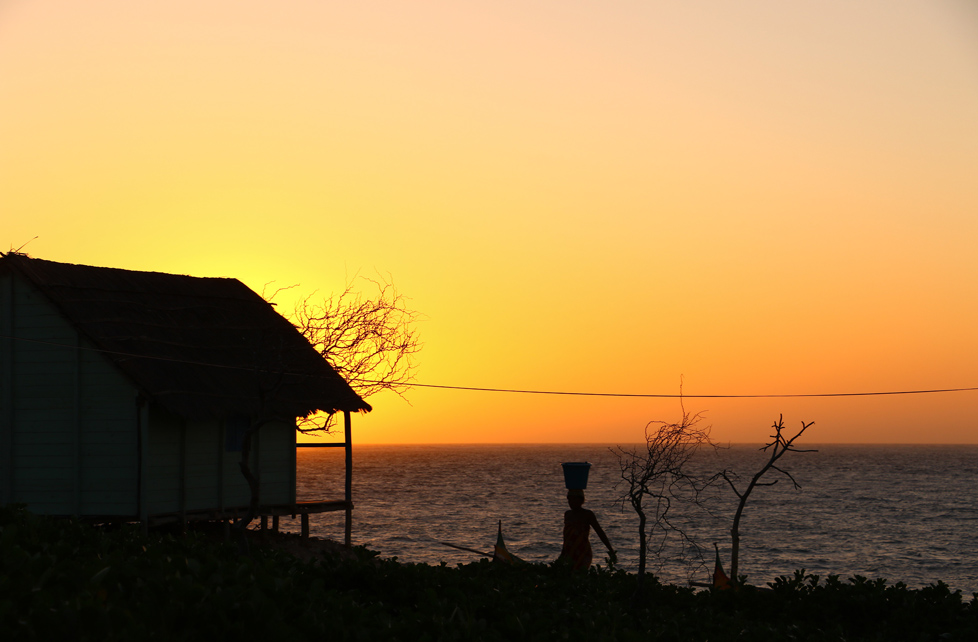 Madagascar is a complex country, filled with intricate layers.  You will see things that confront you and you will see things that delight you. It’s wild, remote, scenically diverse, vexing yet full of character and just like many places in Africa, you leave knowing you have been indefinitely changed, humbled and enlightened. 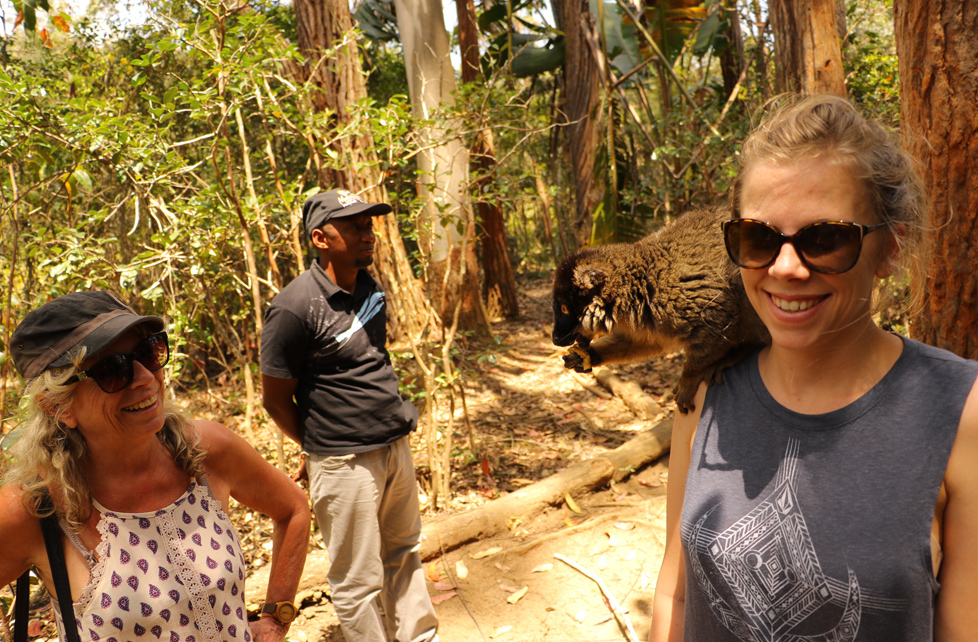