Moments on the Mekong

Posted by Andrea Cook on 01st September, 2016 in Holidays

Saigon, Ho Chi Minh City, 8:25pm on a Friday night and the city is electrifying. A cacophony of noise and kaleidoscopic neon colours, voices competing with scooter engines, hooters, music blaring from distorted radio speakers, BBQ smoke filing the air as the sticky heat of this old colonised French city wraps it all in a frenzied whirl.  It’s like the Vegas of Asia, as we zip through the streets, dodging kamikaze scooters, we make our way to the Liberty Central hotel, where the rooftop pool welcomes our tired and buzzing minds. This is the starting point for our 7 day river cruise along the mighty Mekong Delta, a fabled river system seeped in history, romance and conflict, The pulse of South East Asia.

Arriving at the port of My Tho, our graceful vessel awaits, the flagship RV Mekong Pandaw, is 170-200 square feet, six decks of elegantly polished teak and brass with thirty hands on crew members. We nestle into our crisp and cool twin cabin located on the upper deck as we wait for the double blasts to sound our departure from the mainland. 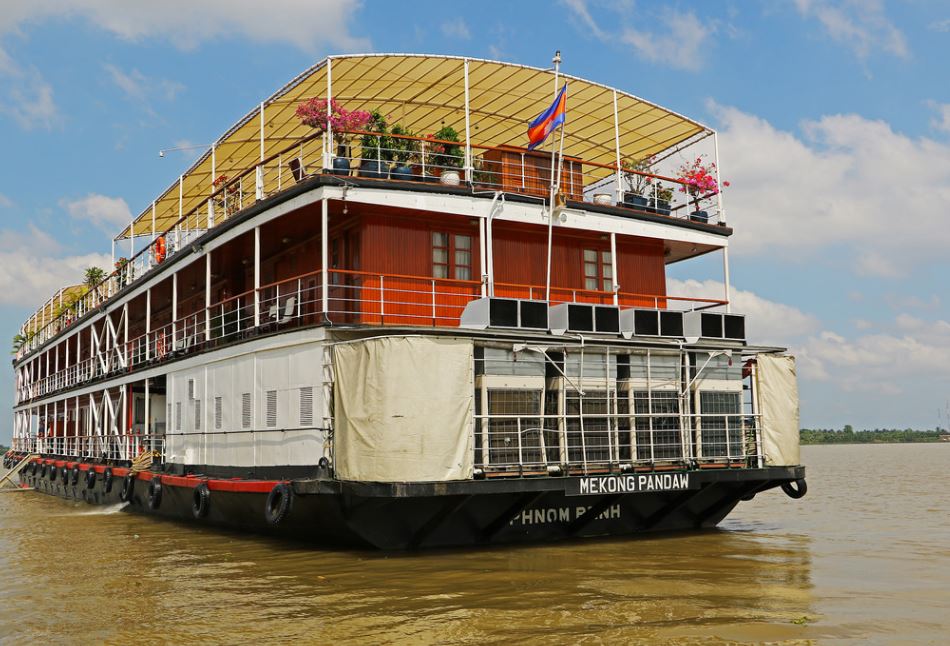 I’ve never “cruised” before, it’s not my normal means of travelling but now in retrospect it’s probably the best way to travel between this section of Vietnam into Cambodia – along the Mekong. This river system is the life force of SE Asia as it runs for 3450 km from the Tibetan Plateau through China’s Yunnan province, Burma, Laos, Thailand, Cambodia and Vietnam. Its fresh water, abundant fish, fertile soil and dense vegetation provides life sustaining resources for the humanity living on her muddy banks. 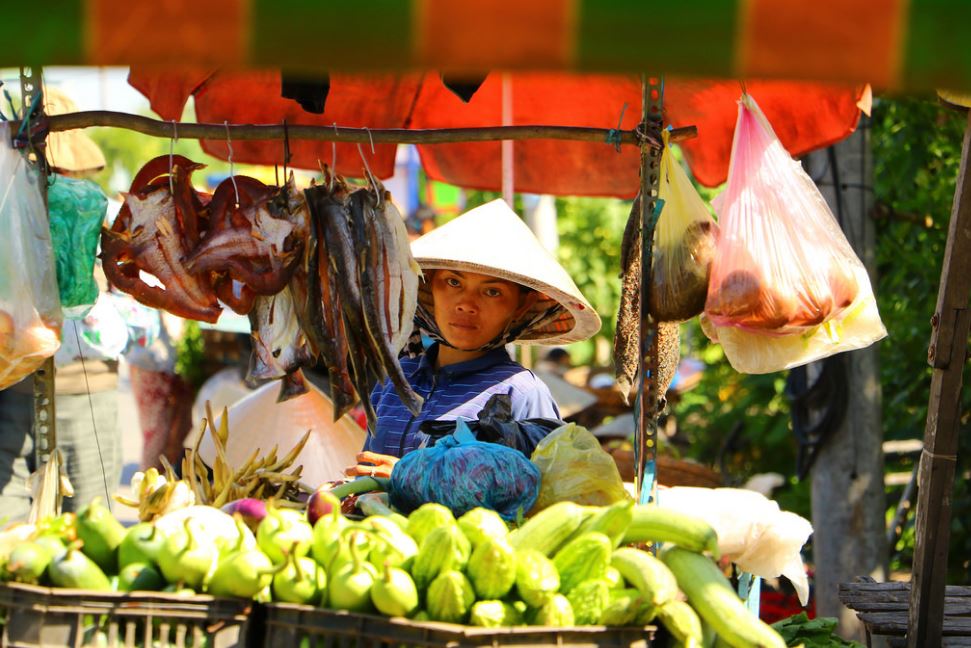 The Pandaw provided the opportunity to enter this unique water world, where farmers rise before the sun to tend their terraced crops, children ran alongside the banks, waving and shouting, water buffalos wade amongst the paddies, fisherman cast their eager nets, women weave reeded delights, houses, boats, villages and colourful floating markets dot the mangrove landscape until the sun sets and the cicadas come out chirp their nightly song. 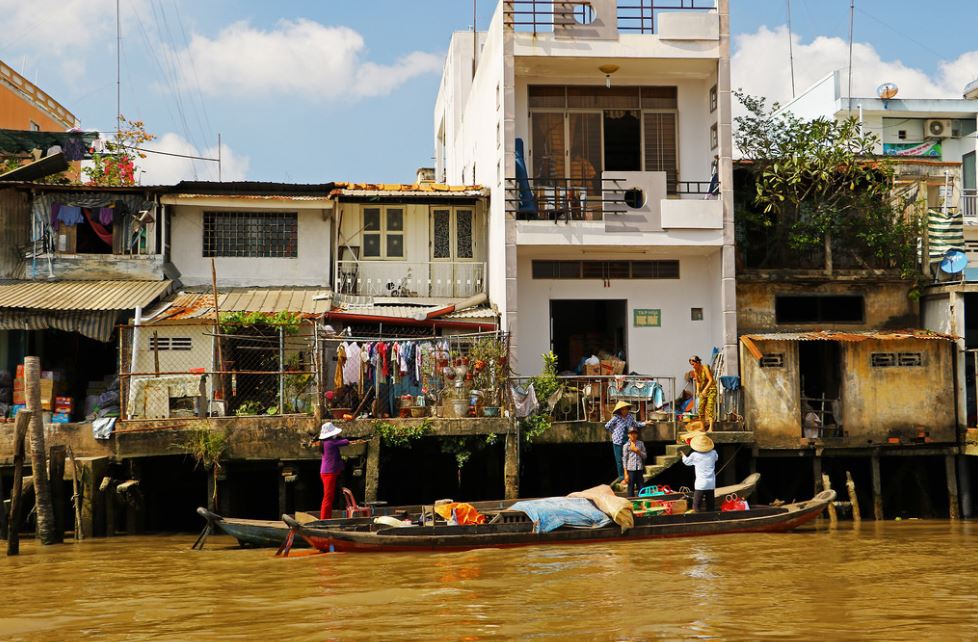 Our humid days were spent on two daily excursions; one in the morning and one in the afternoon, where we explored fresh produce floating markets, delighted in the warm hospitality of the traditional villages, sang our ABC’s at an English school for children and wandered through some of the most spectacular Buddhist Temples and ornate Pagodas reminiscent of the of the great Khmer empire. 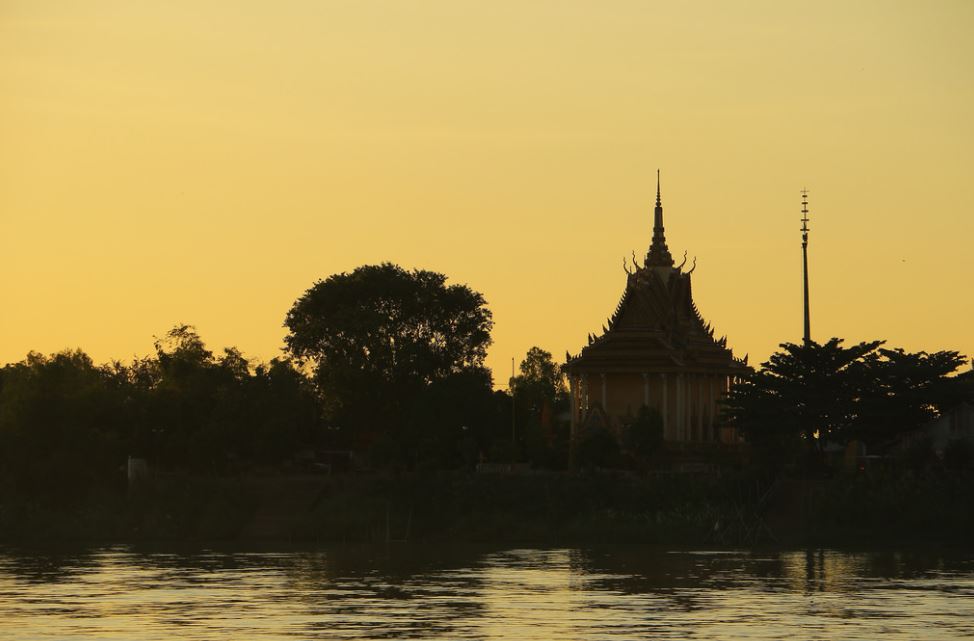 The Pandaw crew, from Captain to Cook, were a wealth of knowledge, warm, friendly and went out of the way to assist where possible, we were in good hands and even persuaded the Captain to stop off in a protected, clean little bay to swim in the emerald waters of the Mekong. 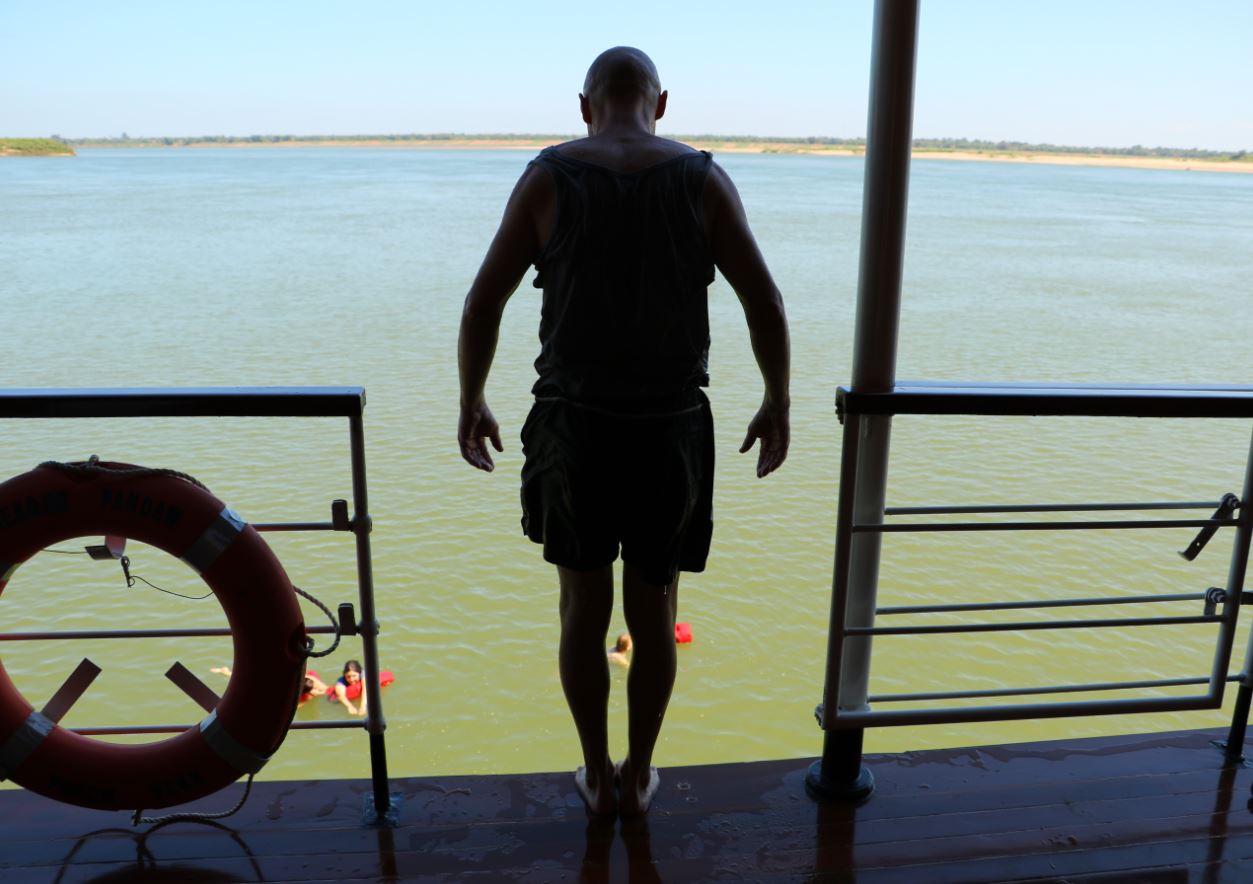 One of the things that still haunt my thoughts to this day, is the chilling injustice and barbaric level of human cruelty which was suffered during the Cambodian genocide under the rule of Pol Pot and the Khmer Rouge between 1975 and 1979. For some reason, it seemed that this happened a long time ago but in fact it wasn’t so long ago and many Cambodians which we came across actually lived in some of the concentrations camps growing up, had family go missing or killed and some are still looking for family to this day. A part of Pol Pot’s master plan was to capture and wipe out all the educated or professional citizens so that the people and the very country itself would become submissive, ignorant and therefore easier to control. Therefore schools, learning to speak English and universities are only now blossoming within the country.  Our guide’s older brother was actually tortured and sadly killed for stealing some palm sugar to eat. Visiting the Killing fields and the Tuol Sleng Genocide Museum in the capital of Phnom Penh is a profoundly heartbreaking and disturbing experience, but I feel a visit to such places is a sign of deep respect and acknowledgment of what our fellow human beings underwent.

After the 7 days of cruising the Mekong we left the luxurious comfort of the Pandaw to fend for ourselves in the dynamically chic city of Siem Reap. Buzzing with eager backpackers to high end hotels and spas, this city has a pulse of its own and one can easily spend days exploring the big draw cards like Angkor Wat Temple complex to the sprawling markets, shops, restaurants and arts and crafts which line the colourful streets. 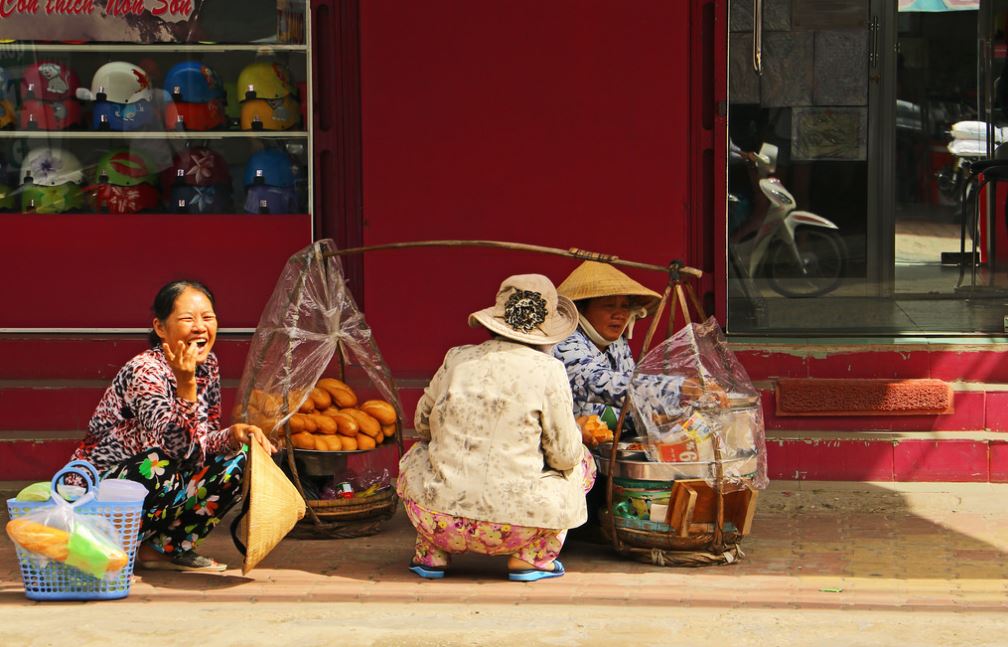 An early wake up and a crisp rickshaw ride in the darkness of dawn had us zooming to the Angkor Complex to witness the iconic sunrise over the Temple. However on arrival at the gates we were met by hundreds of people planning to run the 22km Angkor marathon on the very same morning…great. In light of this our guide recommended we start in the opposite direction, from Ta Prohm Temple to Angkor Temple as there would be less people. To his credit, there was no another living soul once we entered through the crumbling temple ruins. 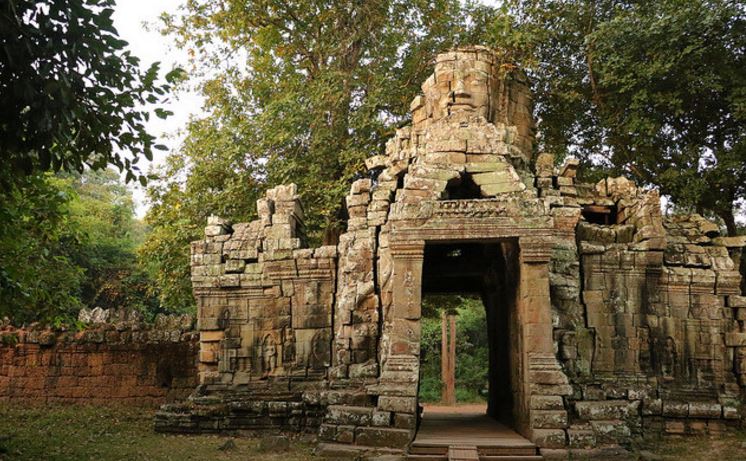 I cannot express the beauty of this place and the surrealism I felt walking along paths seeped in deep traditional and inexplicable history. Dappled sunlight danced along the crumbling walls, whist sculptured bas-relief elephants posed gracefully as you slowly walked passed, the rainforest canopy above kissed our heads with falling leaves whilst its gigantic roots slowly reclaim its jungle ground from the moss covered ancient monuments. We spent the day dream walking, exploring the otherworldly mazes and ruins of this massive temple complex, contemplating spirituality, life, nature vs human ingenuity, cultures, ancient civilizations and occasionally giggling at a suffering marathon runner in the 35 degree heat. 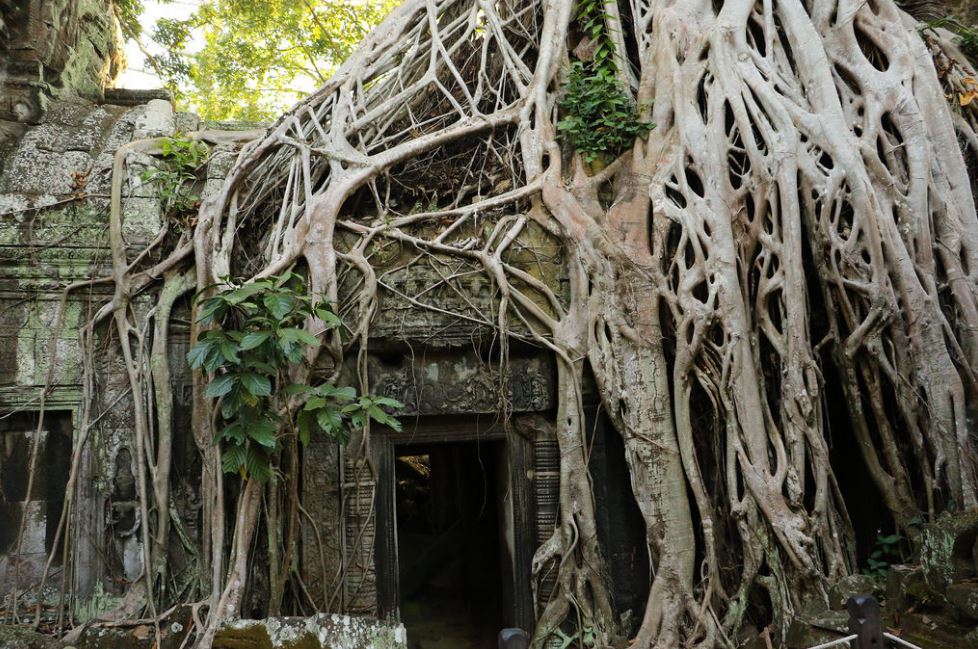 From the chaotic and colourful pulse of Saigon to the ancient temples of Angkor Wat in Cambodia, this cruise encompassed humble fishing villages, rolling rice terraces, kaleidoscopic markets, artisans and farmers to archaeological wonders of the Khmer Empire. River cruising on the Pandaw is a unique glimpse into a way and pace of life that is defined by the ebb and flow of the mighty Mekong current. 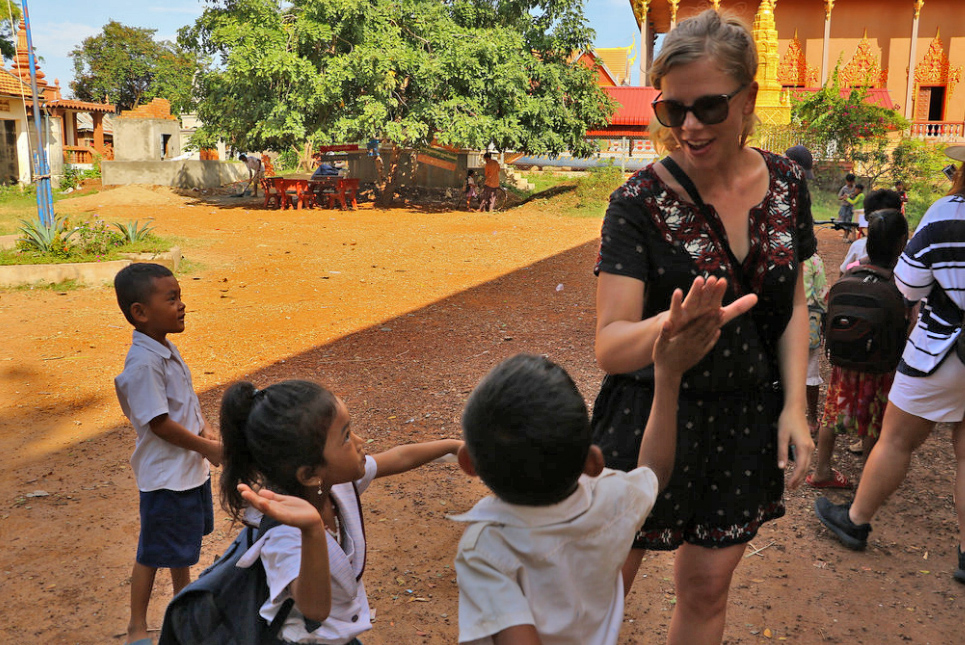